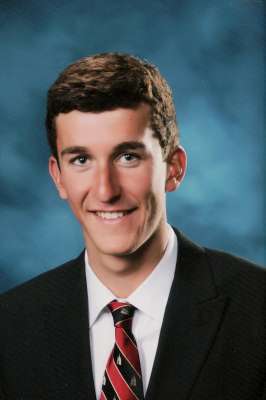 Born on March 19th, 1994. On June 21, 2016, the Lord took him home at the young age of 22. He is survived by his parents, Tim Sr. and Liz; his two brothers Mark and Michael; his grandparents Ed and Gen Hendricks; and many aunts, uncles and cousins.

As a product of Jesuit Education, Timmy had a strong faith in God and love for his family and friends. He attended St. Francis Xavier Elementary (Class of 2008) and Brophy College Preparatory (Class of 2012), where he swam on numerous state championship teams and was team captain his senior year. Timmy recently graduated from Boston College (Class of 2016) with a degree in Economics. He just moved back home to begin his adult life, which was full of hope and promise.

He stood at 6’ 4”, but it was not his size that filled the room. Rather, it was his smile, his pure heart, his beautiful spirit and his sensitive nature that was his presence. You could feel all of these things when he wrapped his long arms around you with a hug. He was the oldest brother and the oldest cousin in a large family, and you could see all of these things when you watched him love his younger brothers and little cousins.

He loved music and sunsets, sharing these passions with friends and family at every opportunity, playing songs to sing along to and insisting they join him on his favorite mountain top at sun-down. This is a testimony to his love of life, friends, and family. He will be missed dearly.

In lieu of flowers, please make a donation in his memory to Brophy College Preparatory programs in honor of Timothy Frakes, Jr. To donate online use: http://www.brophyprep.org/in-memory-of-timmy-frakes-12/

Offer Hugs From Home Condolence for the family of FRAKES, TIMOTHY MICHAEL JR.