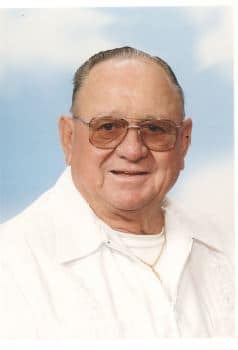 Paul M. Dwyer passed away in his home on December 2, 2021, surrounded by his loving family. Paul was born on April 20, 1933, to the late Francis Harold Dwyer and Kathryn Leona (Nielsen) Dwyer. Paul was born in Phoenix, AZ and was a lifetime Phoenix resident. He attended St. Mary’s Elementary and High School. Paul served two years in the U.S Army from 1953 – 1955. Paul married the love of his life, Patricia “Pat” (Johnson) in 1953. They were married for 68 glorious years. Together they had three daughters, Janice Dwyer Paul (Michael), Brenda Dwyer Allen (Ferrell Gale), and Sharon Dwyer, all of Arizona. Paul had three grandchildren, Kathryn Paul, Zachary Paul, and Douglas Paul (Suzanne) and six great grandchildren, Margaret, Josephine, Owen, Thomas, Edward, and Christopher. He also had many loving friends and extended family members. He loved spending time with his family. Paul is preceded in death by his parents and his only sister, Mary Ann (Dwyer) Johnston.
Paul worked for Anderson Clayton Oil Seed Processing Plant in Phoenix for 43 years. After retiring, he spent every summer with Pat at their Lakeside, AZ home.
Paul loved the outdoors and enjoyed fishing, hunting, and working around his home. Paul could fix anything that broke and could build whatever contraption you could imagine. Paul loved watching old television westerns and he never missed a NASCAR Race on the weekends.
Paul had many friends over his lifespan and always offered a warm hug and smile to everyone he met. Paul had a very kind and generous heart and was always willing to help out family members, friends, neighbors or strangers in time of need.
In lieu of flowers, donations may be made to Hospice of the Valley at www.hov.org or to Manes & Miracles at www.manesandmiraclesaz.org.
Visitation will be held from 9 – 10 am with funeral service at 10 am on Thursday, December 9, 2021 at Whitney & Murphy Funeral Home, 4800 E Indian School Road, Phoenix.

Offer Hugs From Home Condolence for the family of DWYER, PAUL M.