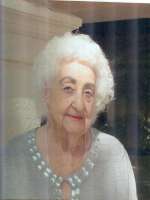 Margaret Abdelnour, born in Los Angeles to immigrant parents, William and Alma Samaha, died recently at age 98.  She was raised in the Imperial Valley, California, and worked with her parents in Calexico and Holtville in their family grocery and dry goods business. In 1937 she married Nicholas G. Abdelnour, who preceded her in death.  They lived in Azusa, California, where they raised their family, and where they were proprietors of Nick’s Dry Goods.  In 1977 she moved to Phoenix, where she could be close to her family, and where she also worked at Bullock’s Department Store.  In addition, she was an avid collector of camel art pieces.  For the last 22 years of her life, she had been a resident at Christian Care Fellowship Square Retirement Home.  She is survived by a son, George Abdelnour (Patricia); daughters, Leah George (Dr. Robert); Helene Abraham (Dr. Edward); and Nicole Doumani (John); seven grandchildren, and nine great-grandchildren.  She was lovingly known to her family as “Queen Mum”.  Her private Memorial Service is pending. Arrangements entrusted to

Offer Hugs From Home Condolence for the family of ABDELNOUR, MARGARET