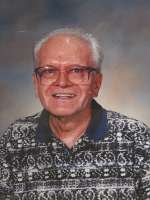 81 of Phoenix, entered a new life on July 31, 2011 at home after a lengthy illness. He was born to Arthur and Edna Adamson on August 13, 1929 in Motor, Iowa. He graduated from Northwest Nazarene College in 1950 and then attended Nazarene Theological Seminary. Upon moving to Arizona in 1956, he completed a teaching degree at Arizona State University. His 50 year teaching career brought a positive male role model into the elementary school system, and encompassed Squaw Peak and Monte Vista Schools, Valley Cathedral, and Central Christian Academy. Always a modest man, he was reluctant to accept a compliment, saying “it is really about Jesus who died for me and I try my best to live like Him every day – to live my life the way He wants me to.” Donald has been a devoted Christian, husband, father, grandfather, brother, uncle, friend and mentor to many. He will be deeply missed. Donald was preceded in death by his wife, Patricia Kirley Adamson and two siblings. He is survived by Glenna G. Adamson, wife of 19 years, his three children: Vicki Becker (Don), Terrance Adamson (Claudia Acosta), and Patrick Adamson (Cindy); stepdaughter Amy Turisk (Paul); seven grandchildren: Nathan and Jacob Guinnip, Andrea Turisk, Lita (John) Ross and David (Kourtney) McGuire, Tammy and Paul Telles, and five great-grandchildren. He is also survived by eight siblings. Visitation will be held Wednesday, August 10th from 6:00-8:00pm at Whitney & Murphy Funeral Home, 4800 E. Indian School Road, Phoenix, AZ. A Graveside Service will be held at 9:00am, Thursday, August 11th at Greenwood Memory Lawn Cemetery, 719 N. 27th Avenue, Phoenix, AZ. A celebration of his life will follow at 11:00am at Calvary Church of the Valley, 6107 N. Invergordon Road, Paradise Valley, AZ. In lieu of flowers, family requests that donations in Donald’s memory be made to Hospice of the Valley, 1510 E. Flower Street, Phoenix, AZ 85014.

Offer Hugs From Home Condolence for the family of ADAMSON, DONALD E