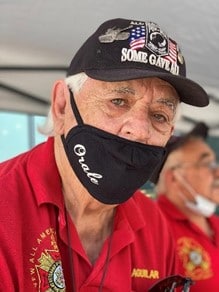 He attended Santa Cruz High School in Eloy and was drafted into the United States Army after he graduated. He served in Vietnam from 1966-1967 in 2nd battalion 34th armor, 4th infantry division as a tank driver.  His armor group was known as the “Fighting Aces” and had a nickname of “Dreadnaughts” given to them by his commanding officer.  He was wounded in battle and received a Purple Heart medal.

Upon returning home, Vidal married his junior high sweetheart, Gloria, on October 26, 1969 and were married for 51 years. Vidal was hired by the U.S. Postal Service with whom he gave 41 years 11 months of dedicated service before retiring.

Vidal was lovingly greeted at the gates of heaven by his parents Agripina and Vidal Aguilar and his brother David Aguilar. He is survived by the love of his life, Gloria, daughter, Sonya (Gavino) and son, Vidal “Tonka” (Brenda). He leaves behind his sisters, Juanita and Hermosinda, and 2 grandchildren, Vidalia and Adam, along with the nieces and nephews he raised, Anthony, Michael, Kiana, and Miranda. Let’s not forget his #1 buddy, great nephew Jatyn. There are also countless nieces, nephews, great and great-great nieces and nephews.

Those who knew him, will remember his wit, his sense of humor and his loving blue eyes.  He loved spending time with family, making funny videos, and hamming it up for pictures!  He was always looking for projects to keep him busy in the back yard while listening to his golden oldies music.  And after working out back you could find him enjoying a sweet treat every evening with a glass of milk.

Vidal was a devoted husband, an amazing father, a protective brother, an awesome Tio, a loyal friend, and a true American Patriot.  He will be painfully missed. While Vidal may not be here with us in body, we must take solace knowing that he is in a better place with no pain or suffering, and that he will always be watching over us, like all good fathers do.

Services will be live streamed via Whitney & Murphy’s Facebook page

Please be mindful of the time you spend during visitation to allow everyone an opportunity to give their love due to only 50 people at a time in the funeral home. A mask must be worn at all times.

Offer Hugs From Home Condolence for the family of AGUILAR, VIDAL