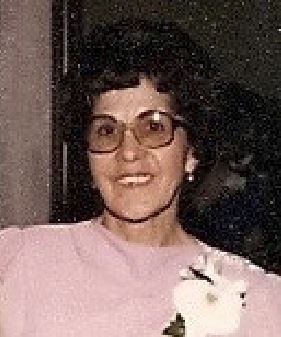 Mary G. Alba, 96, of Phoenix passed away November 26, 2019. She was born in Jerome and was a lifelong Arizona native. Like most people born in Jerome, she loved her little town for the rest of her life and thought of it as her true home, even though she left the little mining town in 1950. Mary married Tino Alba, also a Jeromite, when she was just 17 and he was 20. He worked in the copper mines and she was a homemaker.

Their first child, John, was born in 1943 during WWII. Like many patriotic young men, Tino enlisted in the US Army, and Mary served the war effort as a welder for a B-29 factory in California. When the War ended, Tino returned to Jerome with two Bronze Stars and Mary returned to be a homemaker. Their second child, Patricia, was born in 1948.

In 1950, the mining industry in Jerome had begun to shut down. Tino and Mary moved to Phoenix, where Tino worked as a truck driver for the rest of his life. A few years after Pat, their second daughter, Mary Margaret, was born. She was soon followed by a second son Dan and then the youngest son, Tony.

When you ask people about Mary, one of the things that is frequently mentioned is that she loved to dance. She and Tino spent much of their leisure time on the dance floors of American Legion Post 27 Hall in Jerome, the Riverside Ballroom and Calderon Ballroom in Phoenix and even in a ballroom in Tucson, Arizona. Even late in life, Mary would use her walker to dance with her friend and caregiver Maguií Medina.

Mary held various jobs until she landed her dream job. She became a teacher’s aide at Griffith Elementary School, where Dan and Tony were enrolled. It was a job that she loved and where she was loved and highly respected. When she retired, she was honored with two scholarships that acknowledged her service to children in the English Language Learner Program.

In 1984, Mary took and extended leave from her job at Griffith to care for Tino, who had become afflicted with A.L.S. He died on January 30, 1985. Mary returned to the work she loved until 1988 when she again to family leave to care for her 98-year-old mother, Emiliana Gonzalez. Shortly after her mother’s death, Mary decided to retire, but continued her work with children tutoring struggling students.

Mary always maintained a strong devotion to her family, often caring for her grandchildren while their parents worked, and later, caring for her great grandchildren. She took great joy in these little ones and was blessed to live long enough to know her latest great granddaughter Milah, who is just four months old. The week before Mary was called home, she held little Milah in her arms and gazed into her eyes with unmistakable love.

She is survived by her children, John and Joy Alba, Pat and Leo Hernandez, Mary and Wayne Kurth, Dan and Haydee Alba and Tony and Ann Alba. Her children’s spouses are included as survivors, because Mary viewed them as her very own. She is also survived by her grandchildren Teresa and J.D. Ramirez, John and Kristie Hernandez, Jason Alba and Kristin Alba; by eight great grandchildren, Xavier, Taylor and Jack Hernandez; John David, Mia, Niko, and Natalia Ramirez; and by Milah Alba.

She was preceded in death by her husband Tino, her parents Lino and Emiliana, her siblings Lino, Emilia, and Mercy, and her grandson Leo Alexander.

Offer Hugs From Home Condolence for the family of ALBA, MARY G.