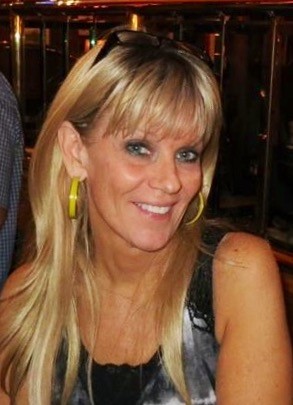 Bridget Noel Coffey Alcocer died peacefully in Scottsdale, Arizona on September 4th, 2017 surrounded by family and friends at the age of 58, after a long and valiant fight against leukemia. Born December 20th, 1958, with the middle name of Noel, she was a Christmas baby and carried that same joyful spirit throughout her life. Bridget grew up in Birmingham, Michigan, always cherishing her Michigan roots and Detroit sports teams. She made the move to Arizona in 1980. Bridget is survived by her devoted husband of 31 years, Frank, a coach at St. Mary’s High School. Bridget so enjoyed being part of the St. Mary’s family for so many years. Bridget’s greatest source of pride was her children and grandchildren; son Francisco Alcocer (wife Jessica), daughter Danielle Alcocer (partner Kim Cumbie), son Miguel Alcocer (wife Emily), son Adam Alcocer (partner Alyssa Amando), step daughter April Anderson (husband Steve) with granddaughters Talya Flagg, Kylie Alcocer and Kara Alcocer. She is also survived by her parents, Patrick and Donna Coffey, her in-laws Dr. Francisco and Virgina Alcocer, her siblings Kevin Coffey, Harvest Crittenden (husband Larry), Michael Coffey (wife Nancy), Katie Smith (husband Randy), Adam Coffey (wife Alicia), Miguel Alcocer (wife Safeena) as well as numerous nieces, nephews, cousins, large extended family and her loving little Yorkie, Cooper. Bridget was accomplished for many years in her work in the health insurance field in Phoenix and loved her work families as well. But more than anything, Bridget was accomplished at living life to the fullest as is witnessed by the enormous outpouring of love at her passing. Always the first to organize and raise money for numerous charitable events, her generous heart was the first thing people noticed, beyond her striking good looks. She was the life of the party and stayed close to life long friends whom mourn her now. She was spirited, sassy, magnanimous and kind. She always had a cheer for her beloved Notre Dame football team, even in losing seasons. She will be deeply, sorely missed. A funeral is scheduled for Saturday, September 9th, 2:00 pm at St. Mary’s Basilica in Phoenix. The family would like to thank all those who sent texts, cards, made phone calls and sent prayers during her long months of illness and thanks especially to the bone marrow transplant team at Honor Health System, Scottsdale AZ. Arrangements entrusted to Whitney & Murphy Funeral Home.

Offer Hugs From Home Condolence for the family of ALCOCER, BRIDGET NOEL COFFEY