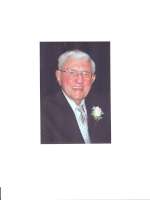 Jack, a Phoenix, Arizona native, was born November 9, 1919 and was promoted to glory on October 8, 2011 surrounded by his loving family. He grew up in Phoenix graduating from Phoenix Union H.S. and Phoenix College. He was an Air Force Veteran serving during WWII and was proud to be an American with a Cherokee Indian heritage. His businesses included owning Allison Markets in the 1940’s and 50’s and leading Jack Allison & Associates Realty for 40 years. Jack was a long time active member, Eucharistic Minister and Lector at St. Theresa Catholic Church and a committed volunteer/Board Member at the Society of St. Vincent de Paul for 30 years. His other interests included the Arizona Varmint Callers, lifetime NRA member, hunter safety instructor and he was an award winning woodcarver. Jack loved Arizona and explored it top to bottom hunting and fishing with his sons. Most of all, he dearly loved his family and relished gatherings with his family and friends. He was preceded in death by Bernadette Allison his wife of 57 years and by his brother Bill Allison. He is survived by his daughter Cheryl Whiting (Bill) and sons John (Diane) and Don (Pamela) and 8 grandchildren and 6 ½ great grandchildren. Visitation will be held 1:00-3:00 P.M. Sunday, October 16, 2011 with a 2:00 P.M. Scripture Service at Whitney & Murphy Funeral Home, 4800 E. Indian School Rd., Phoenix. Funeral Mass will be at 10:00 A.M., Monday, October 17, 2011 at St. Theresa Catholic Church, 5045 E. Thomas Rd., Phoenix. Interment at St. Francis Cemetery, 2033 N. 48th St., Phoenix. Following internment a reception will be held at St. Theresa Catholic Church. In lieu of flowers, the family suggests contributions to the Society of St. Vincent de Paul, P.O. Box 13600, Phoenix, AZ 85002. Jack will be missed but his love will endure.

Offer Hugs From Home Condolence for the family of ALLISON, JOHN HOOPER “JACK”