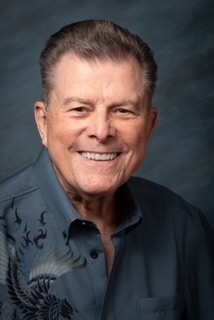 It is with deep sadness that the family of Walter T. Altmann Jr. announce his peaceful passing on Sunday, July 25, 2021 at the age of 77, surrounded with love and care by his wife Ilona, and daughters, Jenifer Desposato and Tara Altmann.
Walt was born on September 27, 1943, to Walter Altmann Sr. and Eleanor Havir Altmann in Georgia. He often, jokingly said that he was from Okinawa, Japan, his beloved island, where he served in the Army as a Staff Sergeant from 1963 to 1967. Walt lived most of his life in Arizona where he raised three daughters and lived with is wife Ilona Altmann (Rozsa) of thirty years.
Walt has been a lifelong believer, a spiritual person, and a positive thinker. He was a goal setter and achiever, never leaving God out of his plans. He owned several businesses throughout his lifetime, but his most recent venture was that of a franchise owner of four of the well-known shipping and printing stores, THE UPS Stores. Walt managed these stores with the utmost pride, reveling in working with young people and enjoyed the journey of learning about everyone’s interests and life plans. He was truly interested in everyone’s well-being and provided life advice often – it was who he was, just ask his employees, friends, family and even those who cared for him up until the day he passed.
He was a proud father and grandfather, and a loving, attentive husband to Ilona. He did not know a stranger, he made lifelong friendships, some, a continent away.
Walt fought bravely against the cancer that took him away from us. Never complaining, never yielding to the disease. Walt was in charge of his destiny.
Walt was preceded in rest by his father Walter T Altmann Sr and his mother, Eleanor Havir Altmann.
Walt is survived by his wife, Ilona Altmann.; his daughters, Denisha de Mos (Daniel), Jenifer Desposato (Scott), and Tara Altmann; nine grandchildren, Mikaela Miranda (Joshua), Noah Miranda, Isaiah Miranda, Gabriela Desposato, Luke Desposato, Sebastian Desposato, Mikaela Desposato, Madeline de Mos, and Adrienne de Mos; his beloved dog Trace, who was chosen to look after his lovely wife, Ilona.
Visitation will be held on Sunday, August 1, 2021 from 4:00 pm – 7:00 pm with Funeral Service to be held on Monday, August 2, 2021 at 11:30 am at Whitney & Murphy Funeral Home, 4800 East Indian School Road in Phoenix. Walt will be laid to rest at the VA National Memorial Cemetery of Arizona, 23029 N. Cave Creek Road, Phoenix, with military honors at the graveside on Monday, August 2, 2021 at 1:30 pm.

Offer Hugs From Home Condolence for the family of ALTMANN, JR., WALTER THOMAS