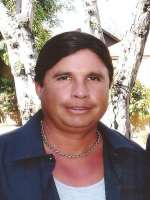 Richard Manuel Alvarez, 43 of
Phoenix, went to join our Lord on December 27, 2011. He was born in Germany on January 9, 1968. A Commercial Truck Driver for 14 years, his passion was music and playing his guitars, camping with his friends and smoking fine cigars and always by his side Malaki his German Rottweiler. Ricky’s strong belief in God gave him a positive outlook in life and always a smile or a good word to his family, friends and co workers. He worked as he played HARD like his music. Ricky was always there for his family and his friends. Now that he won’t be in sight, his presence will always be here in our hearts and our dreams. His soul will live forever. Ricky is survived by Parents Connie and Hilario Amaro and Manuel and Olivia Alvarez, Siblings Robert Ruiz, Veronica Leticia Geraldo Amaro, Amy Felix Ana Mendoza, Lisa Santa Cruz, Alexis Alvarez, Andrei Alvarez, Grandparents Bridget Alcantar and Artemisa Alvarez, and Best Friends Jim Schroyer and Dan Streier. Visitation will be held from 5-8pm Wednesday, January 4, 2012 at Whitney & Murphy Funeral Home, 4800 E. Indian School Rd, Phoenix. Graveside Service will be held on Thursday, January 5, 2012 at 10am at St. Francis Catholic Cemetery, 2033 N. 48th Street Phoenix. Make room for us in that eternal sky. You will be sorely missed down here until we meet again.

Offer Hugs From Home Condolence for the family of ALVAREZ, RICHARD MANUEL