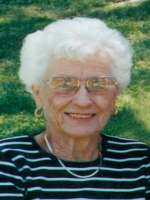 97 of Scottsdale, AZ peacefully passed away in her home on September 16, 2013. Marjorie was born on January 8th, 1916 in Nabb, Indiana to Cecil and Hallie Staples. She is survived by 2 daughters: Carol Jean Clark of Pacific Palisades, CA and Judy Lee Bowman of Fayetteville, TN and 7 grandchildren. She met Eugene Lee while working in the Trust Department of the Valley National Bank. They married January 10, 1936 and Marjorie lived her entire life in the Phoenix/Scottsdale area.  They were long standing members of the Phoenix Country Club and a founding member of Paradise Valley Country Club. Marjorie served on the St. Luke’s Board of Visitors for 50 years. She enjoyed gardening and was an active member in her garden club. Other interests included entertaining, traveling and knitting.  After Gene died in 1972 she later married Don Anderson.   A Celebration of Life will be held at 4:00 P.M. on Saturday, September 28th, 2013 at Whitney & Murphy Funeral Home, 4800 E. Indian School Road, Phoenix. A private burial will take place at Greenwood Memory Lawn Cemetery.  In lieu of flowers donations may be made to St. Luke’s Hospital, 1800 E. Van Buren Street, Phoenix,  AZ  85006

Offer Hugs From Home Condolence for the family of ANDERSON, MARJORIE LEE