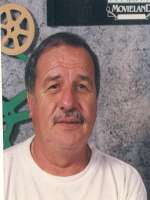 66, of Phoenix, died October 9, 2011 at his Phoenix home. Selmo was born August 23, 1945, in Phoenix, Arizona to Cesario and Josephine Enriquez. He attended Phoenix Union High School in Phoenix, AZ. He then joined the U. S. Army and served in the 25th Infantry of the Vietnam War. He also was a retired CVS employee where he had many friends. He was a sports enthusiast and enjoyed watching all sports and also enjoyed spending time with his family and friends. He is survived by his daughter Monica Enriquez and two grandchildren Breana and Trent Moores of Payson, AZ and his brother and sister-in-law Caesar and Jennie Enriquez. Visitation will be held at 10:30am, with a Funeral Service at 11:30am, Thursday, October 13, at Whitney & Murphy Funeral Home, 4800 E. Indian School Road, Phoenix. Interment will follow at 1:00pm, Thursday, October 13, 2011 at the National Memorial Cemetery of Arizona, 23029 N. Cave Creek Road, Phoenix.