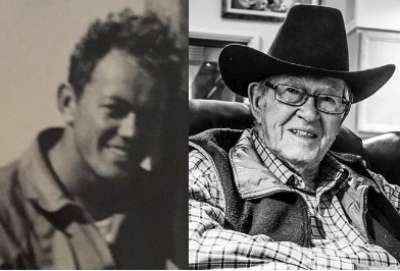 95, passed away on July 20, 2016 at 3:45 P.M. and was surrounded by family. Bill was born on February 8, 1921 in Fort Dodge, Iowa. He graduated from the University of Southern California and served four years in the Navy (Guam). He is survived by his spouse of 43 years, Mary Isobele Arendt and his six children, David (Carrie), Mary (Dave), Anthony (Rhonda), Sally (Patrick), and stepdaughters, Tracey (Tom) and Tammy, 11 grandchildren, and four great-grandchildren. A Memorial Service will be held on Saturday, August 6, 2016 at 1:30 P.M. at Saint Barnabas on the Desert Episcopal Church, 6715 North Mockingbird Ln., Scottsdale, AZ 85253 with a reception to follow at Saint Barnabas. In lieu of flowers, contributions may be made to Hospice of the Valley, http://www.hov.org/donate.

Bill took a fall about a week ago and was admitted to Hospice of the Valley. We knew it was a matter of days. His family was by his side. Archdeacon Sarah Getts, from Saint Barnabas on the Desert Episcopal Church, was there to give Bill communion. At Mary’s request, Sarah read Isaiah 6: 1-7 and then gave Bill communion by touching a wafer dipped in wine on his bottom lip. At that moment, Bill took his last breath. The family was holding hands around the bed.

Isaiah’s Vision of the Lord:

1) In the year that King Uzziah died, I saw the Lord, high and exalted, seated on a throne; and the train of his robe filled the temple.

3) And they were calling to one another: “Holy, holy, holy is the Lord Almighty; the whole earth is full of his glory.”

4) At the sound of their voices the doorposts and thresholds shook and the temple was filled with smoke.

6) Then one of the seraphim flew to me with a live coal in his hand, which he had taken with tongs from the altar.

7) With it he touched my mouth and said, “See, this has touched your lips; your guilt is taken away and your sin atoned for.”

Offer Hugs From Home Condolence for the family of ARENDT, WILLIAM (BILL) JOSEPH