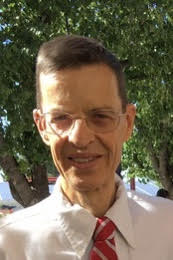 Lars was born on February 2, 1963 in Scottsdale, AZ to Fernando and Sonjha Arriola. He attended Scottsdale High School, and was a strong advocate for keeping the school open as a member of the student advisory board. He went to Georgetown University and studied Economics and Foreign Relations, and then earned his Master’s degree from the University of California, Berkeley. On July 25, 1992, he married Geraldine Arriola. They raised two sons, Peter and Evan, and a daughter, Gabriela.

Lars was a very devout Catholic and an incredible servant. He enjoyed helping out at his church in a variety of ways, as well as devoted a majority of his professional career as a grant administrator with the Society of St Vincent de Paul, where he worked for 20 years. He enjoyed investing time into his children, whether that be going to Peter’s orchestra and choir concerts, Evan’s soccer games, or Gabriela’s musicals.

Lars was preceded in death by his mother, Sonjha, and his wife, Geraldine. His is survived by his three children, Peter, Evan, and Gabriela, his father, Fernando, his brother, Fernando, and many other cousins, nieces and nephews.

A vigil service will be held on Friday, September 2, 2022 at Whitney & Murphy Funeral Home, 4800 E. Indian School Rd. from 5-7pm. A Funeral Mass in honor of Lars Arriola’s life will be celebrated on Saturday, September 3, 2022 at St. Theresa Catholic Church, 5045 E. Thomas Rd. at 12:30pm. In lieu of flowers, donations for the children’s transitional needs and education can be donated on FreeFunder.com (search “Arriola Family Funding”).

Offer Hugs From Home Condolence for the family of ARRIOLA, INGEMUND LARS