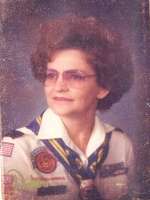 Sonjha Darlene Arriola, 77, died peacefully in the early morning on Saturday, February 4, 2012, with hope that our Lord will raise her to new life, where she will share her friendly spirit, zippy comments, artistic flair and love for children in Heaven. Her mission was fulfilled in raising her two sons and guiding hundreds of young boys to “Do Their Best,” build good character and learn new skills, in serving as a dedicated Cub Scout volunteer for more than thirty years. Born in Clarkston, Washington on May 13, 1934, Sonjha grew up with seven siblings on farms in rural Idaho. In 1960, she moved from California to Phoenix, and worked as a waitress for almost twenty-five years in the Phoenix area, including stints at Mountain Shadows, Durant’s, El Chorro Lodge and Los Olivos. Most of all, she shared her time, love and creative energy as a Den Mother, Cubmaster and in other leadership roles, where she used her talents for teaching youth and adults, organizing activities and making crafts to enrich the youth in Scouting. She received the Silver Beaver award in 1988, the highest award given to volunteers in Boy Scouts of America. She is survived by her two sons and their families: Lars, his wife, Geri, and their three children, of Phoenix, Arizona; and Fernando, his wife, Ariana, and their three children, of Naperville, Illinois; and her former husband, Fernando, of Phoenix, Arizona. A Funeral Mass to celebrate her life will be held on Friday, February 10 at 10:00 am at St Theresa Catholic Church, 5045 E Thomas Road, Phoenix. Donations in lieu of flowers may be given to Cub Scout Pack 147, c/o St Theresa Catholic Church, 5045 E Thomas Road, Phoenix, 85018.

Offer Hugs From Home Condolence for the family of ARRIOLA, SONJHA DARLENE