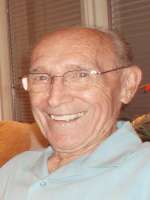 The world lost a true hero on January 30, 2012, when Frank Aschenbrenner left this earth and went to his heavenly reward. Frank was a friend to many, a man whose legacy to football will long be remembered, a husband, father, grandfather and great-grandfather. He was best known for his years at Northwestern University, where he played football, became a Sigma Nu and luckily had a job at the Delta Gamma sorority house. Those who were lucky enough to know Asch will always remember his quick wit, wonderful storytelling ability and how he was a good and loyal friend. On January 1, 1949 he played for NU in the Rose Bowl, helping his team to beat Cal and along the way scored the first touchdown of the game by running for a record setting 73-yards, a record that stood for 44 years. He was named the Most Valuable Player as player of the game. Asch would be honored again in ’93 by his induction into the Rose Bowl Hall of Fame, along with Bo Schembechler and O.J. Simpson. During his football career he had the opportunity to play during World War II for the Great Lakes Naval Academy for legendary coach Paul Brown and later for Lynn “Pappy” Waldorf & Bear Bryant. He graduated Northwestern University and was drafted by the Pittsburg Steelers in the fourth round. With his retirement from the NFL, he went on to a successful career in the packaging business. One of Frank’s passions in life was traveling to the South Pacific. When his Sigma Nu brother, Ralph Trompeter died in 1981, Frank offered to show Ralph’s widow, Charleyne Trompeter, the highlights of Maui, Hawaii. With the sounds of the ocean to serenade them, they fell in love. A life-long bachelor had found his soul-mate. Together they traveled the world and grew in their love and devotion for each other. They had 28 wonderful years together. Francis Xavier Aschenbrenner was born to Mathilda and Franz Aschenbrenner in 1925 in Heibuhl, Germany. At the age of 3 he boarded a steamship with his parents to begin their life in America and further moved to Milwaukee, Wisconsin where he grew up. One of his fondest memories of their home was the large Golden Delicious apple tree in their back yard. All other apples were held in comparison to those wonderful apples of his memory. Frank was preceded in death by both of his parents. When Frank married Char, he got not only a lovely woman, but her four “adult” children, Rob Duncan (Crawford, Colorado), P.J. Trompeter III (Lees Summit, Missouri), Pam Trompeter Aguilu (Fountain Hills, Arizona) and Paul Trompeter (Soldotna, Alaska). In time, along came grandchildren Molly Sherman, Brandy Duncan, Peter J. Trompeter IV, Tiffany Gill, Danny Aguilu, Tommy Aguilu and Kaylin Marie Trompeter. They also had 7 great-grandchildren. He will be missed by all. A Memorial Celebration will be held later. In lieu of flowers, please make a donation to your favorite charity in the name of Frank Aschenbrenner . Arrangements were entrusted to Whitney & Murphy Funeral Home.

Offer Hugs From Home Condolence for the family of ASCHENBRENNER, FRANK XAVIER