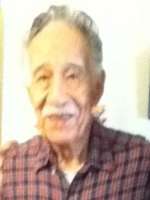 86, of Mesa, entered into the hands of the Lord on June 1, 2013.  He was born in Tolleson, AZ on February 13, 1927.  He was a retired Teamster.  Andrew leaves behind his beloved wife of 60 years Emilia, son Andrew, daughter Roseann (Thomas) Pond, three grandchildren Alfred, Robert and Ruben Garcia, eight great-grandchildren and two great-great grandchildren.  He is also survived by his two sisters Amelia Pacheco and Adela Gonzales.  May his love live on, with all who have been blessed by him.  Visitation will be held from 6:00-8:00 PM with a Rosary at 7:00 PM on Tuesday, June 4, 2013 at Whitney & Murphy Funeral Home, 4800 E. Indian School Rd., Phoenix.   Funeral Mass will be at 10:00 AM on Wednesday, June 5, 2013 at Immaculate Heart of Mary Catholic Church, 909 E. Washington St., Phoenix.  Interment will follow at St. Francis Catholic Cemetery.

Offer Hugs From Home Condolence for the family of AVILA, ANDREW ALDAY