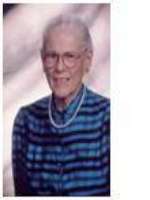 Billie Jane Baguley, 92, passed away on January 12, 2012. She is preceded in death by her parents William Hatrick and Mary Elizabeth Becker, and her husband Peter Baguley.
Billie Jane was born December 6, 1919 in Fresno, California. The first two years of her life were spent in Sierra Nevadas construction camps while her father, an engineer, worked various assignments. In 1922, she and her mother moved to Phoenix where her father had become a partner in the Phoenix Blue Print Company. She attended Kenilworth Elementary and graduated from Phoenix Union High School in 1937 and Phoenix College in 1939. She then went to work for her father which she had done most summers since she was sixteen, first as an errand boy and then a paper trimmer. Upon her father’s insistence to further her college education, she enrolled at Arizona State Teachers College and received a bachelor’s degree. While finishing her master’s degree, she taught children of local cotton pickers in Picacho School (near Picacho Peak). After receiving her masters in 1943, she taught at Casa Grande High School and then moved to Chicago to attend the Institute of General Semantics and teach elementary and high school students. In 1947, she returned to Phoenix to teach at Tempe High School. A fellow teacher inspired her to travel to England in 1948. With sponsorship by the British Council, she attended the University of Nottingham and taught in the nearby schools. In 1955, she returned briefly to Phoenix to run and eventually sell the Phoenix Blue Print Company after her father’s passing. Upon returning to Nottingham, she taught at the Broadgate School for Girls. During holiday times, Billie Jane traveled to various countries and parts of the British Isles. She married wine merchant Peter Baguley in November, 1957 at St. Peter’s Church in Nottingham. Peter completed his degrees at Oxford University and worked for the Conservative Research Department in London. They retired to Arizona in 1975. Billie Jane was a philanthropist. She was awarded the Spirit of Philanthropy Award by the Phoenix Museum of History and established the Becker-Baguley endowment for the Arizona 4H Youth Foundation. The Heard Museum (where she and Peter had volunteered for years) proudly boasts the Billie Jane Baguley Library and Archives, a research facility and resource collection of nearly 25,000 American Indian artists. And, due to her generosity and long time support, Dale Chihuly’s “Desert Towers” now has a permanent home at the Desert Botanical Gardens. Other organizations which benefited from her generosity include Meax Home Museum, Pioneer Museum, Campfire Association, African Scholar’s Fund and the Historical Society of Schuylkill County, PA. Funeral Service for Billie Jane will be held Saturday, January 28, 2012 at 10am at St. Stephen’s Episcopal Church, 2310 N. 56th Street, Phoenix, AZ. A reception will follow at 12pm at Desert Botanical Gardens, 1201 N. Galvin Parkway, Phoenix, AZ. In lieu of flowers, please send donations to St. Stephen’s Episcopal Church.

Offer Hugs From Home Condolence for the family of BAGULEY, BILIE JANE