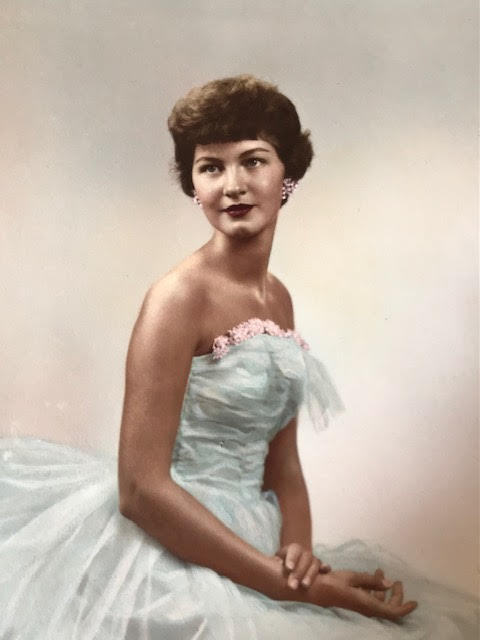 Marianne E. Bailey, age 82, passed away peacefully while holding the hand of her beloved husband October 3, 2020.

She was born in Spokane, Washington on April 15, 1938 to R. Max and Mariane Etter. She grew up in Spokane and attended Hutton Elementary where she would first meet her future husband. She graduated from Lewis and Clark High School, and went on to attend Sarah Lawrence College in New York, where she had fond memories of time spent with her cousins. She transferred to University of Washington where once again she would meet and now marry her husband, Dick Bailey. As a young bride, she attended University of California Berkely and later graduated Phi Beta Kappa from Arizona State University, where she taught English. She remained an avid reader and researcher of her own topics of interest, as well as those that interested her family and friends.

Marianne loved family gatherings and poured much love and detail into planning holiday dinners and her children’s weddings. She kept in touch regularly with her parents and siblings throughout her life and enjoyed extended visits and travel with them. She was interested in all the news from family including nieces, nephews, and their growing families. After moving to Phoenix in 1960, she enjoyed being active in the Crisis Nursery and Junior League of Phoenix and treasured the long-term friendships with dear friends she met. She loved babies and took care of her grandchildren and remained interested in their activities and lives into young adulthood. Her phone and IPAD reflect her active correspondence with friends and family, and she always kept those close as her health declined.

Her husband shared with her a love of history, literature, and travel. They collected first edition illustrated children’s books and traveled to shows frequently, getting to know their favorite book dealers. She planned their trips to New York with great detail to see her sisters and enjoy the latest theatre. She traveled with her husband and children to Spokane many times enjoying amazing Etter reunions. Her family traveled to Phoenix to help her and Dick celebrate their 60th wedding anniversary in their beautiful old adobe home.

In lieu of flowers, the family requests donations be made to the Cystic Fibrosis Foundation.

Offer Hugs From Home Condolence for the family of BAILEY, MARIANNE E.