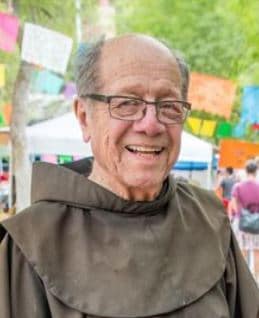 Franciscan Rev. Luis Baldonado, OFM passed away on Tuesday, June 21, 2022. Born in New Mexico June 14, 1925 he attended St. Anthony Minor Seminary (Santa Barbara) and joined the Order as a novice in June of 1945. The commute across Arizona from home and back those years was his first introduction to this state. He made Solemn Profession of vows on the 11th of June, 1949 and was ordained a friar priest June 08, 1952 at Mission Santa Barbara.

Fr. Luis was introduced to Phoenix as a child with a short stint living in central Phoenix. New Mexico remained his home. He passed through on the train in his years in the seminary and on his way from his first assignment in Pueblo, Colorado staying in a room that is now the rector’s office of the Basilica friary.

He spent a year and half at Monrovia Maryknoll Sanitorium in the fall of 1954 for a TB rest, then to Mission San Antonio at Brothers School until 1955. Holy Family Parish in Pueblo Colorado was his first official parish assignment until 1958. He came to Arizona at Mission San Xavier in Tucson until 1961. The German gothic St. Joseph Parish in central Los Angeles was a major appointment for him until 1980. He was sent to Guadalupe parish in San Jose, California until 1983 and then back to Phoenix for three-year stint as the director of The Franciscan Renewal Center in Scottsdale. He went as pastor to Mission San Luis Rey Parish in Oceanside, CA. in 1986, back to San Jose from 1988-1994. He has been here in the Phoenix area since then. He served as pastor at Sacred Heart parish and as guardian of St. Mary’s, before retiring at the Basilica in 2006. He continued to part of the ancillary staff, hearing confessions and spiritual direction for those who came to the door.

A short memorial Mass will be offered at the Basilica at 12 o’clock p.m. on Saturday, June 25, 2022 with visitation through the afternoon. Vespers (Evening Prayer) will be prayed by the Franciscan Friars at 5:00 p.m. on Sunday, June 26, 2022 in the afternoon with a reception following. The Funeral Mass will be celebrated at Saint Mary’s Basilica on Monday, June 27, 2022 at 10:00 a.m. with burial at St. Francis Cemetery immediately following. He leaves behind his sister (Sr.) Rosalina Baldonado, IHM, nieces and cousins, members of the St. Barbara Province of the Franciscan Friars, innumerable friends from his assignments throughout the area. In lieu of flowers, donations can be made to the St. Mary’s Basilica Patronado in his name. Condolences may be expressed at www.whitneymurphyfuneralhome.com