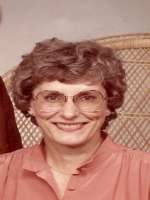 Mary Ann Baranowski passed away as peacefully as she lived her life on February 1, 2013 in Tucson, AZ. Born September 27, 1931 in Galveston, TX, she moved to Phoenix with her parents in 1949. Mary Ann graduated from St. Mary’s High School and started her career at Merrill Lynch. She worked as a manager at Mountain Bell before retiring in 1986. Mary Ann was a devout Catholic of the Franciscan Order and served as Regional President of the Order in the 1990’s. Mary Ann spent her retirement traveling and volunteering every week at St. Vincent De Paul. Mary Ann is survived by children Susan (Robert) Mitchell, Paul (Karla), Matt (Carol), niece Felicia (Bob) Deas, and 7 grandchildren. A Memorial Service will be held at St. Theresa Catholic Church, 5045 E. Thomas Road, Friday, March 1, 2013 at 10am. In lieu of flowers please make donations to St. Vincent de Paul.

Offer Hugs From Home Condolence for the family of BARANOWSKI, MARY ANN