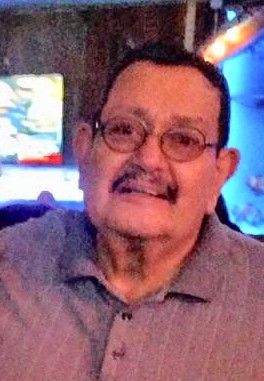 Miguel H. Barraza, 71, of Phoenix, AZ passed away on October 4, 2019. He is survived by his wife of 41 years, Kathleen, son Jason (Leila), grandchildren Aiden and Clare, brother Victor (Sara), sister Stella (Gene), as well as many nieces, nephews, and cousins. Miguel was preceded in death by his father Victor and mother Antonia, and brothers Robert and David. Miguel was born in Douglas, Arizona and was a lifelong Arizona resident. Miguel was known in his youth by the nickname “Boffo.” He graduated from Northern Arizona University and was employed as a Parole Officer with the Arizona State Department of Corrections. He embodied the qualities of compassion, tenderness, strength, a sense of adventure, a sense of humor, and a commitment to faith, family and community. Miguel was an avid sports fan who also served as a youth sports coach for many years. He loved animals, especially two favorite pets, Paisley Anne and Lucky Lady.
A Funeral Mass will be celebrated at 10:00 AM, Tuesday, October 15, 2019 at St. Francis Xavier Catholic Church, 4715 N. Central Avenue, Phoenix. A reception will be held in Anderson Hall following Mass.
In lieu of flowers, the family requests donations be made to the St. Francis Xavier Building Fund, 4715 N Central Avenue, Phoenix, AZ 85012.

Offer Hugs From Home Condolence for the family of BARRAZA, MIGUEL H.