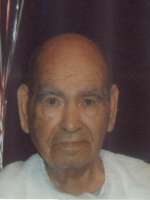 Conrado, 93, born on February 19, 1919 in Morenci, AZ died on May 11, 2012 in Phoenix, AZ to the late Martin Barriga and Felicia Chacon. He was the youngest of 10 siblings. Conrado married the late Magdalena Arroyo Barriga in 1945. He worked for Reynold’s Metal Company for 33 years. Conrado served at the Philippine Islands in the Army during World War II. Conrado is survived by his children, Evangelina Zuniga-Mejia and her husband Antonio, Joe George Zuniga and his wife Manuela, Phyllis Licudine, Conrado A. Barriga, Jr., and his late children Margie Hernandez, Martin Barriga, Frankie Rangel and Helen Barriga. Conrado was also a grandfather of 55 grandchildren, a great grandfather of 75 great grandchildren, a great, great-grandfather of 48 great, great-grandchildren and many nieces and nephews. He will be dearly missed and he will always be in our hearts. Visitation will be from 6-8pm, with a Rosary at 7pm, Monday, May 21st, 2012 at Whitney & Murphy Funeral Home, 4800 E. Indian School Road. Funeral Mass will be at 10am, Tuesday, May 22nd at St. Agnes Catholic Church, 1954 N. 24th Street. Interment will follow at St. Francis Catholic Cemetery.

Offer Hugs From Home Condolence for the family of BARRIGA, CONRADO CHACON