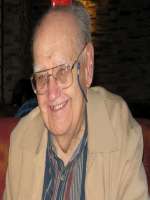 Peter (Pete) Joseph Barron, 92, of Scottsdale passed away on March 25, 2012. Pete was born December 9, 1919 in Chicago, Illinois. He attended Tolleston High School in Gary, Indiana where he met his wife, Harriet Thiess; they were married in 1949. Pete attended Northwestern University in Chicago. In 1955 the Barron’s moved to Phoenix. He retired as a Price Analyst for the U. S. Department of Defense in 1983. Pete is survived by his wife of 62 years, Harriet, daughter Carol, and Carol’s friend, partner, and Pete’s “best buddy” Louise. Pete enjoyed traveling, his computers, and desserts. Services and reception will be held on Saturday, March 31, at 11:00am at Whitney & Murphy Funeral Home, 4800 E. Indian School Road, Phoenix, Arizona, 85018. Special thank you to Hospice of the Valley for the excellent care provided.

Offer Hugs From Home Condolence for the family of BARRON, Peter “Pete” J.