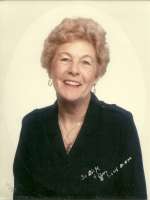 Mrs. Ruth Irene Bartlo, 97, passed away on November 27, 2010. Ruth was born on November 8th, 1913 in Lebanon, OR. She traveled with her parents from Oregon to Kansas, then to California before moving to Phoenix in 1926. She married Alva Long in 1930 and they had two sons. She later married Walt Bartlo and moved to Payson, AZ. After Walt’s passing she returned to Phoenix where she resided until her death. Ruth is survived by her son Richard, daughter-in-law Jan, son Wallace, daughter-in-law Pat, grandchildren Rebecca, Bryan, Denise, Cheryl, Mike, Kathy and Rick. She was also survived by 14 great-grandchildren as well as 15 great-great-grandchildren. Arrangements entrusted to Whitney & Murphy Funeral Home. No memorial services will be held.

Offer Hugs From Home Condolence for the family of BARTLO, RUTH IRENE