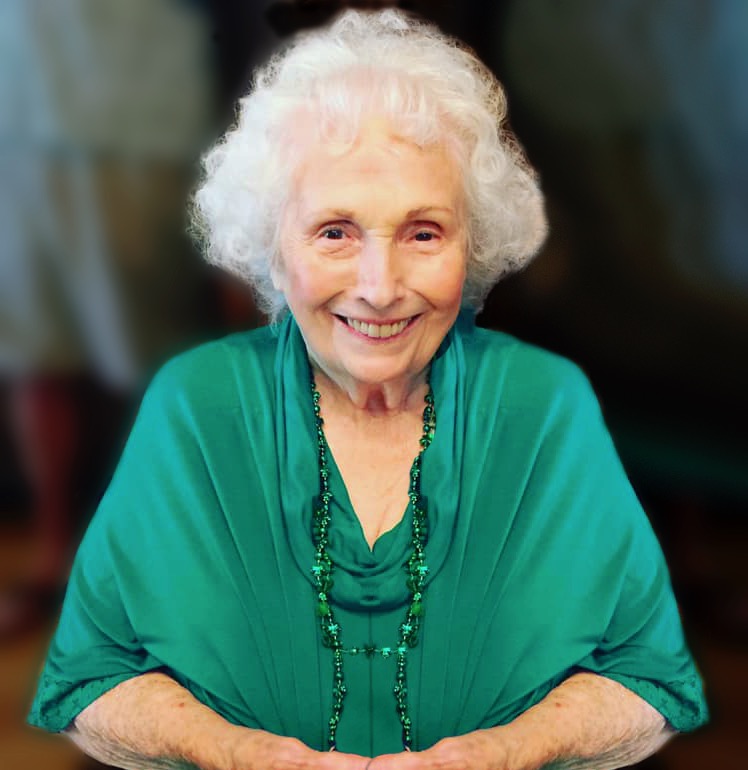 Mary Ann O’Shea Basha, 95, passed away peacefully on Wednesday, November 6, at her daughter’s home in Tempe, Arizona. She was born September 12, 1924 in Chicago, IL to John and Annie (Hagan) O’Shea. Mary was the loving widow of A.N. Ike Basha Sr., co-founder of the Basha Family of Stores established in 1932.
In her younger days, Mary enjoyed the simple pleasures in life. She was a Jai alai (paddle ball) champion and enjoyed riding her bicycle. Mary was proud of her Irish heritage, and in 1944 she was crowned the “Irish Queen” at the annual St. Patrick’s Day celebration in Chicago.
Mary graduated from high school in 1942 and began working as a payroll clerk at Field Headquarters in Chicago where she met her soulmate and future husband, Ike, who was in the quartermaster corps of the Army. They were married on February 5, 1946. Shortly after their wedding, Ike was discharged from the Army, and they returned to Chandler, Arizona where they had five children.
Mary was blessed with a strong maternal instinct and love for her children that allowed her to be a hands-on mother, even after becoming a widow at the tender age of 33. Despite the hardship, Mary never remarried, opting instead to partake in activities that served her children. Mary was a den mother to a group of Cub Scouts that included her two sons, she organized a cake booth every year at the St. Francis Annual Fiesta to raise money for her children’s school, and she participated in a number of other activities whenever a loving hand was needed.
Mary is survived by her three children; Cheryl (Joe) Bayless, Stormy Basha, and Johnny (Dawna) Basha, by her six grandchildren, who fondly referred to her as Momo, Mo, or Murry, nine great-grandchildren, and several nieces and nephews.

Upon her passing, Mary was warmly welcomed through the Gates of Heaven by those who preceded her in death; her parents, husband, three sisters, two brothers, and two children, Susan and Charles Basha.

As the matriarch of a growing family, Mary was a pillar of strength on which her loved ones could always rely. Her tremendous inner strength was softly concealed by her fair complexion and delicate skin that made her as beautiful on the inside as she was on the outside. For Mary’s love, her family is blessed beyond belief; for her strength that was apparent until her last breath, they remain in awe; and for the legacy of selflessness and grace that Mary left behind, her family is eternally grateful.
May the road rise to meet you.
May the wind be always at your back.
May the sunshine warm upon your face.
May the rains fall upon your fields.
And until we meet again,
May God hold you in the hollow of His hand.

Services were already held. Donations may be made in Mary’s honor to Hospice of the Valley at https://www.hov.org/donate/
Condolences may be expressed at www.whitneymurphyfuneralhome.com

Offer Hugs From Home Condolence for the family of BASHA, MARY ANN O’SHEA