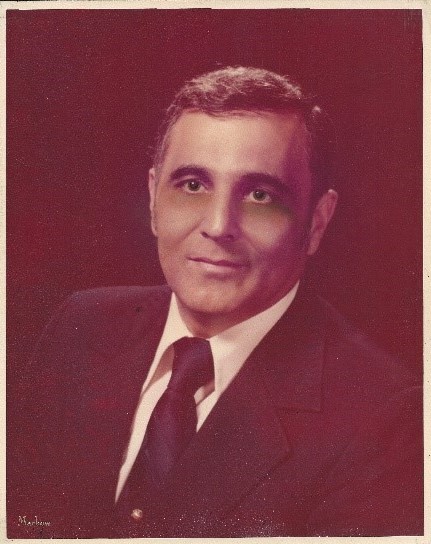 Albert “Al” Basila, 87, of Phoenix, Arizona, passed away on New Year’s Eve, Saturday, December 31, 2016. Al was born November 20, 1929 in Alamogordo, New Mexico to Fred and Edna Basila. He graduated from North High School and attended the University of Arizona prior to being drafted into the United States Army in 1951 where he served our country proudly for two years. On October 23, 1954, Al married the love of his life Marlene Estfan. They enjoyed 62 brilliant years together and were blessed with 3 children, Stephen, Edward, and Patricia. Al spent most of his career working for Bashas, a locally owned grocery chain where he retired after 43 years as Executive Vice President of Retail Operations. In 2004 he was honored for his successes by being inducted into the Food Industry Hall of Fame. Al was charismatic and truly had a passion for the grocery business; he was beloved for his integrity, fairness, and character. He was an avid golfer and enjoyed playing the piano and spending time with his family. Al is survived by his wife Marlene, son Stephen (wife Nancy), daughter Patricia, granddaughter Kristina, granddaughter Shelley Flecky (husband Andrew), granddaughter Tracy O’Haver (husband Michael), grandson Stephen Jr, sister Norma Francies (husband Phillip), and great grandchildren Alex Flecky, Sam Flecky, and Patrick O’Haver. A celebratory Mass will be held at 10:00 am, Friday, January 6, 2017 at St. Francis Xavier Catholic Church, 4715 N. Central Avenue, Phoenix, AZ 85012. In lieu of flowers, the family asks that you consider donations to Hospice of the Valley, 1510 E. Flower Street, Phoenix, Arizona, 85014, or to your favorite charity.

Offer Hugs From Home Condolence for the family of BASILA, ALBERT “AL”