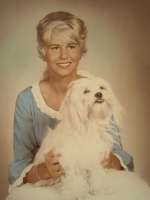 Barbara Elizabeth Baughn passed away peacefully in her sleep February 15, 2012 at the age of 68. She was born in Los Angeles, CA on April 14, 1943 to Alfred and Barbara Baughn. Barbara was known for her gardening, her love of animals and her adventures in traveling the world. She leaves behind three children, Ginny DiJulio, Diana Hendershot and Louis Hendershot. She is survived by five grandchildren. A Visitation will be held Tuesday, February 21, 2012 from 11:00 – 12:00pm at Whitney & Murphy Funeral Home, 4800 E. Indian School Rd., Phoenix. A Graveside Service will follow at 1:30pm at Greenwood Memory Lawn Cemetery, 2300 W. Van Buren, Phoenix.

Offer Hugs From Home Condolence for the family of BAUGHN, BARBARA ELIZABETH