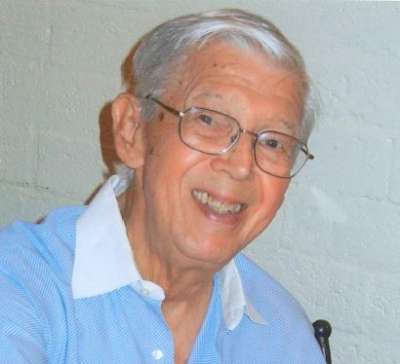 Raphael Francis Baumann, 88, of Phoenix, Arizona, passed peacefully to eternal life on Wednesday, March 19, 2014.  Born to Alvin J. and Margaret T. Baumann in the tiny farming community of Maplewood, Door County, Wisconsin on April 22, 1925, “Ray” graduated from Marquette University with a Bachelor’s Degree in Mechanical Engineering in 1945 and shortly thereafter was commissioned an officer in the United States Navy following Midshipman School at Columbia University.  He served his country proudly, both actively and in the active reserves for 35 years, when he retired at the rank of Captain.  While in the US Navy, Ray met the love of his life, Virginia E. “Genie” (Welch), in Washington, DC and they wed on July 3, 1946 in Alexandria, VA.  Two daughters were born of this union.  During their long, loving marriage, they lived in the Boston area, then Natick, MA from 1946-1959 where Ray worked as a mechanical engineer for Enterprise Engine and Machinery Company and taught engineering classes at Wentworth Institute, now part of Northeastern University.  During this time, Ray earned a second Bachelor’s Degree, this time in Business, graduating first in his class at Northeastern University.  From 1959-1965 , The Baumanns lived in Montvale, then Tenafly,  New Jersey while Ray worked as an engineer for Ingersoll Rand in New York City.  In 1965, Ray and his family moved to Phoenix, Arizona where he managed the Power Division of Empire Machinery Company for 25 years until his retirement in 1990.  Ray continued to serve as a consultant in his field, was active in the Navy League including serving as its state president and enjoyed playing golf and poker with his many friends.  After 55 years of marriage, Ray’s loving wife, Genie passed away in 2001.  Always devout in his faith, Ray remained active in numerous lay ministries in his parish community.  It was there that he was blessed to find happiness and companionship for a second time when he met and eventually married his wife, MaryElaine (Eckman) on April 23, 2005, a day after his 80th birthday.  Together they continued to serve their church and enjoy life to the fullest!  Ray’s life was a testament to keeping God as the focus and family as the heart!  The example he set daily was an inspiration to all those whose lives he touched.  Ray will always be remembered as a truly elegant man, genuine, honest and giving, a hard worker, a loyal friend and a fun-loving, devoted husband, father, grandfather and great-grandfather.  His gentlemanly manner and charming personality endeared Ray to all who knew him and he will be missed greatly.  Ray is survived by his wife, MaryElaine, his loving daughters, Kathleen A. Baumann and Patricia B. Ore, son-in-law Michael L. Ore, grandchildren Kevin Ore, Emily McKenna (Scott), Sarah Cylkowski (John), Brendan Ore, and great-grandchildren Amelia, Benjamin and Jack Raphael Cylkowski.  His extended family includes step-children Laura Atwell (Pete), Peggy A. Eckman and Mark S. Eckman (Laura Murphy) step –grandchildren Mackenzie A. Rodgers (Dustin), Cole Atwell, Alex Eckman, Daniel Eckman, Nichole Monashefsky, Lizzy and Bryce Eckman, and three step-great-grandchildren.  Family and friends are invited to join in celebrating Ray’s life at a Visitation on Tuesday, March 25, 2014  from 6-8 PM with a Scripture Service at 7 PM at Whitney & Murphy Funeral Home, 4800 East Indian School Road.  The Funeral Mass will be celebrated on Wednesday, March 26, 2014 at 10:30 AM at St. Thomas the Apostle Catholic Church at the corner of N. 24th ST and E. Campbell AV.  Interment will follow at St. Francis Catholic Cemetery.  The family invites everyone to remember Ray not with a tear, but with a smile and a small act of kindness in his memory.  In lieu of flowers, contributions may be made in Ray’s name to Hospice of the Valley, 1577 East Flower Street, Phoenix, AZ  85014.

Offer Condolence for the family of BAUMANN, RAPHAEL F.