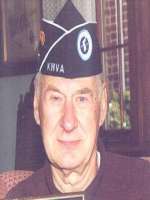 81, distinguished veteran of the Korean War, passed away peacefully in his sleep on June 19, 2012, and is now resting with the Lord. Born and raised in Chicago, IL, Ron met and married his beloved wife, Dorothy, 60 years ago. They moved to Phoenix, AZ in 2010. He is survived by his wife, Dorothy, his sons Michael (Patti) and Stephen (Sharon); his daughters Susan Carr (Rob), and Marianne; and his grandchildren Aimee Simpson (Phil), Jonathan, Kristine, Jeffrey, and Stephanie. Visitation will be held on June 24 from 6pm to 8pm with a Scripture Service at 7pm at Whitney & Murphy Funeral Home, 4800 E. Indian School Rd. Funeral Mass will be held June 25 at 10:30am at St. Thomas the Apostle Catholic Church, 2312 E. Campbell Avenue. Interment will be at St. Francis Cemetery, 2033 N. 48th Street. In lieu of flowers, donations in his memory may be made to the Alzheimer’s Association, 1028 E. McDowell Road, or to Hospice of the Valley, 1510 E. Flower Street, Phoenix, AZ 85014.

Offer Hugs From Home Condolence for the family of BAYERS, RONALD STANLEY