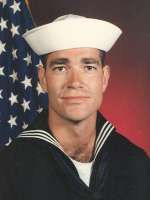 The loving son of Wilbur and Genevieve Bayham, passed away on September 16, 1020. Born on December 1, 1960 in Phoenix, AZ, the sixth child in a large Catholic family of eight children; John grew up in Phoenix and attended Saint Simon and Jude Elementary School and Brophy College Preparatory. John was an Equipment Asset Manager in the U.S. Navy and served in the Gulf War. He was an exceptionally talented, fine artist and saw himself as a simple man who loved painting and drawing the everyday life he observed in the city. John was a kind and gentle soul, and is much loved by his family and will be sorely missed. In addition to his parents, he is survived by his brothers and sisters; Elizabeth Ann, Charles, William (Suzanne Mercer-Bayham), James, Joel, Christopher (Ellen), and Peter, 5 nieces and 1 nephew. Visitation 7-8pm with a 7pm Rosary, Wednesday, September 22, Whitney & Murphy Funeral Home, 4800 E. Indian School Road. Funeral Mass at 4pm, Thursday, September 23, at Brophy Chapel, 4701 N. Central Ave Phoenix. Interment will be at 10am, Friday, September 24, at the National Memorial Cemetery of Arizona.

Offer Hugs From Home Condolence for the family of BAYHAM, JOHN FREDERICK