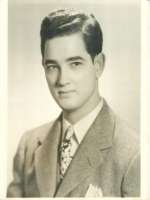 Wilbur Christopher Bayham, M.D. passed away on February 14, 2013. Born in L.A. on August 6, 1925 to Charles Bayham and Lucretia Fauria. At a young age, his family moved to their roots in New Orleans, LA. As a child, he enjoyed roller skating throughout the French Quarter visiting his extended family and spending time at his grandfather’s awning shop. In 1944 as a young man in college during WWII, he was one of three students at LoyolaUniversity in New Orleans selected to complete medical school before entering into the Army. While studying at the Loyola School of Medicine in Chicago, he met the love of his life Genevieve Shea during his internship at CookCountyGeneralHospital. In 1949, Wilbur and Genevieve had their first child Elizabeth Ann. Entering into the Army Medical Corp as a Captain, he was stationed in Stuttgart, Germany with the occupation Army where – among other assignments – he helped maintain the readiness of a mobile field hospital during the Cold War. While in Germany, Wilbur and Genevieve had two sons. In 1952, he left active duty and completed his residency in Internal Medicine with a subspecialty in Cardiology at San DiegoCountyGeneralHospital while also serving as a 1st Lieutenant in the Army Reserves. In 1954, he left the Army Reserves and moved his young family to Phoenix, AZ where he built the Northwest Phoenix Medical Building with his brother Alan Bayham and father while building his practice. In Phoenix, his family continued to expand with the addition of 5 more sons. Wilbur worked tirelessly and was a devoted provider to his family and devoted caretaker to his patients. He continued practicing medicine well into his eighties reluctant to give up his passion. He is deeply loved and will be greatly missed by all of us. Wilbur is preceded in death by his beloved son John, wife Genevieve, son Joe, and survived by his children:  Elizabeth, Chuck (Debbie), Bill (Sue), Jim, Chris (Ellen), and Pete; six grandchildren:  Zoe (Josh), Molly (Davis), Adrian (Matt), Jake, Audrie, and Maya; six great grandchildren:  Diego, Santiago, Joaquin, Samantha Shea, Quinn and Macy. Visitation  is from 6-8 PM with a Rosary at 7 PM on Thursday, February 21 at Whitney & Murphy Funeral Home; the Funeral Mass is at 10:00 AM on Friday, February 22 at Ss. Simon & Jude Cathedral, 6351 N. 27th Avenue, Phoenix.

Offer Hugs From Home Condolence for the family of BAYHAM, WILBUR CHRISTOPHER