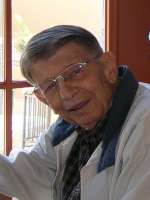 Bill moved from Pittsburgh to Phoenix in 1950 and was employed by Salt River Project until He retired from Accounts Payable in 1989.

Bill was known for his music.  He is a WWII vet, and was in the 7th Division Army Band in the Army of Occupation in Korea.  He continued playing piano – solo, and in his Let’s Dance Orchestra – in a variety of venues in the Phoenix area, with his last “job” of 7 ½ years as volunteer piano player in the Mayo Hospital Atrium.

He always sang in church choirs:  Grace, Faith and Christ Church-Lutheran, and was organist at St. John’s Lutheran for 13 years.   He also sang with the Symphony Chorale and the ASU Choral Union.

Memorials may be given to the Christ Church-Lutheran Organ Rebuilding Fund, the American Lung Association of Arizona, or the Arizona Cancer Center in Tucson.

Offer Hugs From Home Condolence for the family of BEATTIE, WILLIAM HERBERT, JR.