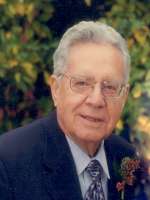 Joe G. Bedia, 96, passed away on June 18, 2012. He was born on August 13, 1915 in Flagstaff, Arizona. He attended and graduated from Phoenix Union High School. He meet his true love, Trine, soon after and they shared 67 years of marriage prior to her death in 2005. Joe worked for United Liquor for many years as a Delivery Driver then as a Salesman. In March 1958, he went into business with his daughter and son-in-law and started C&B Dairy. He served on the Board of Directors for United Dairymen of Arizona from 1974 to 1985. Joe possessed a strong work ethic, loved his rose gardens, took pride in his show pigeons but his greatest pride was his family. Family meant everything to him and he was loved and cherished by his extended family. Now we say…In God’s care you rest above, In our hearts you rest with love. He is survived by his daughter, Dorothy, son-in-law, Manuel Caballero and son, Ronald Bedia, 7 grand children- Cindy (Dwayne) Arrington, Lori (Don) Hibbard, Stephanie (Charlie) Gray, Craig (Heather) Caballero, Michelle Dameron, Michael Bedia, Gregory Bedia, 18 great-grand children, 6 great-great-grand children, nieces, and nephews. He was preceded in death by his wife, Trine. Visitation will be held Monday, June 25, 2012, from 5:00 to 8:00 p.m. with Rosary at 7:00 p.m. at Whitney & Murphy Funeral Home, 4800 East Indian School Road. Phoenix, AZ. A Funeral Mass will be held at 9:00 a.m. on Tuesday, June 26, 2012 at St. Mary’s Basilica, 231 North Third St., Phoenix, AZ. The family requests that expressions of sympathy take the form of contributions to Hospice Compassus, 1675 East Monument Plaza Circle Casa Grande, AZ 85122. The family would like to extend their heartfelt gratitude to everyone at Hospice Compassus and Olive Branch Home for their love and compassion given to our beloved father and grandfather.

Offer Hugs From Home Condolence for the family of BEDIA, JOE G.