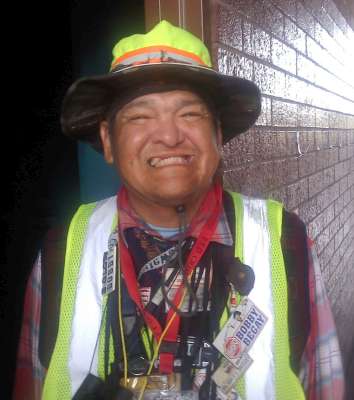 On December 17, 2015, Bobby Begay left us to be with his “Lord, God and Jesus!”  He will be deeply missed by his family and friends who loved and cherished him. He was preceded in death by his father, Elmer Hosteen Begay; his mother, Geraldine Ann Begay; brothers Howard Stephen Begay, Raymond Lee Begay and Anthony Charles Begay; and sister Tina Marie Hylton.  He is survived by brothers Ferris (Ed) Begay and Charles Anthony Begay; and his sister Loretta Lynn Begay; cousins, nieces and nephews, as well as all those families he adopted as his own. Bobby was an instant, lifelong friend to anyone who had the privilege of crossing his path.  He had a special relationship with members of the Phoenix Fire Department who made him an honorary member of their family for decades.  Once you met him, you never forgot him.  He was often seen walking or riding the bus with his Phoenix firefighter hat, reflective vest with numerous I.D. Badges, flashing lights and camouflage pants.   On those days where you got caught up in the rat race of life or other frustrating things, Bobby would immediately re-direct you to a better place and brighten up your day. The laughter that would always ensue in his presence, his quirky sayings such as “you ain’t gonna know” “bout time you got that” “get the devil outta your head” or “get the 1-2-3 (love) in your heart” along with his uncanny ability to completely “rearrange” a Johnny Cash song all seemed to prove that God purposefully puts certain angels on this earth to remind us of what truly matters most in life. Special thanks to everyone who loved and cared for Bobby throughout his life including the Phoenix Fire Department Family, Phoenix Police Department, his caseworkers, workers at IHOP and Starbucks on 44th Street and the caring nurses, doctors and staff at Phoenix Indian Hospital who went above and beyond to lovingly care for him in his final days. Visitation will be at St. Agnes Catholic Church, 1954 North 24th Street, Phx, AZ on Saturday, December 26, 2015 at 9:00 am with Mass at 10:00 am. Burial to follow at Greenwood Memory Lawn Cemetery. Contributions can be made to United Phoenix Firefighter Charities. Finally, in Bobby’s words, “Here’s hoping you don’t forget Bobby’s birthday on November 28th and 1-2-3, I love you my friends!” Arrangements entrusted to Whitney & Murphy Funeral Home.

Offer Hugs From Home Condolence for the family of BEGAY, ROBERT “BOBBY” LEWIS