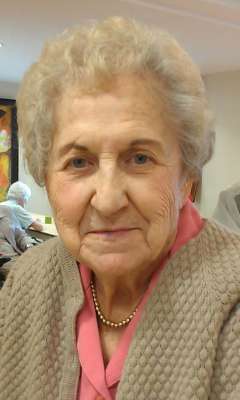 Our beloved mother, grandmother, and “GG,” Lucille “Lou” Benkovic, passed away on March 14, 2015, at age 94, with her family at her side. She is preceded in death by her husband of 44 years, John Benkovic. She is survived by her two daughters, Diane Elliott (Gary) and Carol Hodus (Carl), her four grandchildren, Beth Grady (Sean), Michael Elliott (Lesley), Lisa Hodus, and Lauren Stine (Josh), her four great-children, and a fifth great-grandchild on the way. Lou and her husband were both born and raised in Chicago. They started their family there and remained in Chicago and its suburbs until relocating to Phoenix upon John’s retirement in 1983. She was involved in her community, volunteering at St. Joan of Arc Catholic Church and socializing at her local senior center. She loved playing cards and board games, working jigsaw puzzles, and starting each day by doing a crossword puzzle. She especially enjoyed doing these things with her grandchildren and was very active in their lives. Family mattered most to Lou, and she could always be counted on to deliver homemade soup when someone was ill or have fresh-baked cookies waiting for her grandchildren when they came to visit. She loved making people laugh, and her holiday gag gifts were the talk of family gatherings. A Memorial Service will be held on Thursday, April 23, 2015 at 10:30 AM at St. Joan of Arc Catholic Church, 3801 E. Greenway Road, Phoenix, Arizona 85032. In lieu of flowers, contributions can be made to Hospice of the Valley, Gardiner Home, 1522 W. Myrtle Avenue, Phoenix, AZ 85021. Arrangements entrusted to Whitney & Murphy Funeral Home.

Offer Hugs From Home Condolence for the family of BENKOVIC, LUCILLE MARIE