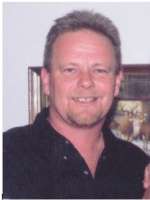 Richard Allen Bernhardt, age 49, passed away unexpectedly on February 15, 2013 at his residence in Peoria, Arizona. Richard was born August 14, 1963 to Harold and Gladys Bernhardt in Sheboygan. Richard attended St. Paul’s Lutheran school and Sheboygan Lutheran High school. He was united in marriage with Marianne Nelson in Phoenix Arizona on March 10, 2001.

In addition to his wife Marianne, Richard is also survived by one son, John Curtis (Ashley) Bernhardt of Buckeye, Arizona, two daughters; Talia Nelson of Peoria, Arizona and Christi Helling of Wisconsin. Richard is also survived by two sisters; Betty Ninmer of Sheboygan, Wisconsin, Joanne Raatz of Sheboygan, Wisconsin. Two brothers; Harold (Nancy) Bernhardt of Howards Grove, Wisconsin, Daniel (Karen) Bernhardt of Sheboygan and numerous nephews, nieces and grandchildren. Richard was preceded in death by his parents; Harold and Gladys Bernhardt, one brother, David Bernhardt, and one brother-in-law, Robert Raatz. Richard was a proud, caring and generous husband, father, brother, and grandfather. He always put others needs ahead of his own, and will be greatly missed in this world. I was once told that life is like a rose garden. God seems to pick the best ones. Today this is true. In accordance with his family’s wishes, his cremation will be followed by a Memorial Service of Remembrance that will be held at 6:30pm,  Thursday, February 21st  at Whitney & Murphy Funeral Home, 4800 East Indian School Rd., Phoenix, Arizona 85018. Wishes of condolences can be sent to The Bernhardt Family 6944 W. Beryl, Peoria, Arizona 85345. In lieu of flowers a Memorial fund has been established by his family.

Offer Hugs From Home Condolence for the family of BERNHARDT, RICHARD ALLEN