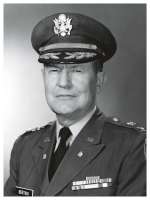 Serving in the Canal Zone during WWII, Gen. Bertino was a ‘Bushmaster’ in the 158th Inf. and a 14th Inf. Jungle Platoon Leader.’  Rugged and fearless masters in the art of jungle warfare, they assisted in designing and inventing special equipment and operational techniques employed in jungle operations.  As Platoon Leader and later as Capt. in the Panama Mobile Forces, he performed reconnaissance and rescue missions in Panama, Peru, and Ecuador, deep in the Amazonian jungle. At war’s end, he was awarded the Legion of Merit.

He was Chief of Staff for Major Generals: Joseph Ahee, John C. Wilson, Jackson Bogle, and Brig. Gen. Charles W. Fernald.  In 1974, Gov. Williams conferred upon him the title and rank of Brigadier General closing his 36-year career.

A highly skilled outdoorsman and masterful gardener, he worked the Bertino Farm throughout his military career. At heart, he always considered himself a farmer. A University of Arizona graduate, he held a degree in Plant Pathology. A private man with a very keen intellect, his mastery of detail and recollection was remarkably incisive and never diminished with age.

His wife of 62 years, the late Peggy Thim Bertino, and his 3 sisters; Margaret, Alice and Elsie preceded him in death. He will be deeply missed by his two beloved daughters, Jean Soldat and Nancy Bertino  as well as by his extended family and dear friends.

A Memorial Service will be held on Friday, February 8, 2013 at 10 a.m. at Whitney & Murphy Funeral Home, 4800 E. Indian School Road, Phoenix, followed by a high honors military interment at St. Francis Cemetery, Phoenix. In lieu of flowers, donations in Felix’s honor may be made to Homes for Our Troops at www.homesforourtroops.org.