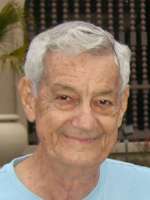 Richard (Dick) Betes, 82, passed away in Phoenix, Arizona, on Thursday, March 22, 2012, after a long battle with myelofibrosis.
Dick was born in 1929 in Prescott, AZ, to Clyde and Pearl Betes. He enjoyed his school years in Prescott and graduated from Prescott Senior High School in 1947. He attended ASU and graduated in 1952 with a degree in Marketing and Advertising. He married Elizabeth (Bette) Del Rae in Prescott in 1952. They moved to Phoenix and then to Williams, AZ, until 1961 when they moved back to Phoenix. During this time they were blessed with two daughters, Debra and Cynthia. In 1968, Dick and Bette went into business as BAP Import Parts. As CEO and President, he enjoyed being in the auto parts business for nearly 44 years. He took pleasure in playing the piano and telling jokes. His favorite activity was traveling with his wife, children, and grandchildren to favorite spots in Colorado and California. He will be forever loved and missed by Bette, his wife of almost 60 years, his two daughters, Debby McCarthy and Cyndi (Keith) Thompson, and grandchildren, Erin and Kelli McCarthy, and Amy, Jenny, and Jeff Thompson. Dick was a remarkable man who was truly admired and respected by all who knew him. He was an honorable man of high moral standards. His sense of humor will live in our hearts forever. He will be greatly missed and always remembered. A Funeral Mass will be held on Friday, March 30th at 1:30 PM at Brophy Chapel, 4701 N. Central Avenue, Phoenix. Interment will be at St. Francis Cemetery on Saturday, March 31st, attended by the family. In lieu of flowers, donations in Dick’s memory can be made to St. Mary’s Food Alliance or Hospice of the Valley.

Offer Hugs From Home Condolence for the family of BETES, RICHARD