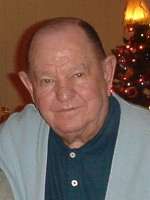 Bruce A. Bethancourt, Sr., 92, of Phoenix, Arizona, peacefully went to be with the Lord on the morning of 28 March, 2013, during an extended stay in the Fresno, California home of his daughter, Joanne Allen and lovingly attended by his daughter, Mary Alice Burke, R.N.

Funeral Services for Bruce, Sr., will be held in St. Agnes Catholic Church in Phoenix, Arizona at 10:30 AM on Friday 05 April, 2013. There will be a private family viewing held at St. Agnes from 9:30 AM on Friday 05 April followed by a viewing for friends of the family, from 10:00 AM until 10:25 AM.  Interment will be at St. Francis Cemetery following the conclusion of funeral services.

Bruce was born 09, August, 1920 in Santa Rita, New Mexico;  the youngest son of Wiltz Joseph Bethancourt I and Mary Emma Perrenot.  Bruce was preceded in death by his parents, three sisters, four brothers and his dedicated and loving wife, Eileen.

During the depression years, Bruce earned ten cents per day, tacking produce boxes together under the supervision of his brother Arthur, who would then transport and sell them to local farmers.  In the later years of the depression, Bruce became an apprentice and then journeyman engraver for a small business owner in downtown Phoenix.

Bruce, as a small child developed a love for aviation that grew during his teen years and remained throughout his adult life.  During the late thirties, Bruce’s  older brother Art managed to purchase a luscombe which he then flew on weekends when he could assemble the required cash for fuel and oil.  When his brother had landed, serviced the aircraft and departed, Bruce would serrupticiously avail himself of the use of the Luscombe; undoubtedly his way of exacting justice for the earlier ten cents per day thing.  It didn’t take brother Art long to identify and chastise the “Phantom Aviator”.  During those years, Bruce managed, by various means, to acquire flight time in the Fairchilds, Waco Travelaires, Gull Winged Stinsons and Cessna Travelairs that later came to characterise the “Classic Aircraft” of aviations “Golden Years”.

Following Pearl Harbor, Bruce became a member of the Civilian Pilot Training organization, serving as a Primary and Basic Flight Instructor at Thunderbird Field (now Scottsdale Municipal Airport) and then at Falcon Field in Mesa, Arizona, where he trained aviation Cadets for the British Royal Air Force (RAF).  While stationed at Thunderbird and Falcon Fields, Bruce flew Boeing PT-17s, Vultee BT-13s, North American T6s, Cessna “Bamboo Bombers”,  and whenever possible, any other aircraft that came to be tied down at either of those fields.

During the closing years of the war, Bruce was stationed at Tonopah, Nevada, and Hamilton Field in Oakland California, where he was a multi-engined aircraft instructor.  Bruce was discharged in 1947, whereupon he and his brother Art and Art’s wife Bess, applied their wartime flying experience to a business venture, forming Southwest Airways, a school to provide comprehensive flight instruction to returning GIs.

Following his experience with Southwest Airways, The CAA licensed Bruce to perform Private, Commercial and Instrument flight examinations and shortly thereafter, Bruce became the Chief Pilot for the Phoenix College Flying School, a unit within the Phoenix Union High School and Phoenix College System. Under the management of “Boots Watts”, the Flying School provided ground school and flight training, eventually operating seven Aeronca 7ACs, two Cessna 140s, one Stinson Station Wagon and two Vultee BT-13s. In the mid-fifty’s, the U.S. Navy donated two North American SNJ-3s (Navy version of the T6) to the flying school. Bruce and a former student ferried the two aircraft from Litchfield Park to Sky Harbor Airport, with the Arresting Hooks still in place.  There are few people who lived in Phoenix during those years that cannot recall seeing the Flying Schools’ aircraft, with the “Bumstead” Bear insignia on each side of the fuselage, flying over various areas of Phoenix and Scottsdale.  The students that Bruce and the other instructors trained became weekend flyers, fixed base commercial pilots, pilots for the various airlines and career military aviators.  During the Flying Schools’ operational lifespan, it’s safety record was marred only once – when a student inadvertently taxied over a runway light, inflicting $11.45 damage.

In the early sixties, The Flight School was closed and Bruce became an instructor for several of the flight schools that were, at that time, also located on the North end of Sky Harbor Airport. Bruce also continued to provide daytime ground school instruction for the High School System and evening ground school instruction at Phoenix College. Bruce retired from classroom teaching after being a PUHS-PC System faculty member for 45 years.  During the late 1970s Bruce flew for Grand Canyon Airline where he remained until finally bringing his successful flying career to a close.

Although Bruce often worked six and seven days per week, his children knew him as a patient father who provided well considered and often humorous advice; and never failing to provide warmth and affection to his many children.  It was not unusual for visitors to find Bruce, on weekend evenings, sitting on the floor with the gang gathered around, watching Televisions Westerns such as “Maverick”, “Lawman”, and “The Life and Legend of Wyatt Earp”.  Typical of Bruce, he considered his children to be his most important achievement.  He reveled in the accomplishments of his children as one became a Real-Time Software Engineering Manager, working with launch vehicles, one became a Medical Doctor, one an Art Historian, two achieved considerable success in Business and Automotive Management, another became a Clinical Nurse Educator in Labor and Delivery at a large hospital, another became a Para-Legal and member of the faculty at a large community college, while yet another become an Ultrasound-Technologist.

Those who knew Bruce well knew him to be honest and straightforward in his speech and in his actions. Bruce was graced with a personality that sparked friendships with professionals from many walks of life.  Bruce, in his own professional life, tirelessly promoted aviation as a safe, timely and effective means of moving people and products across many boundaries and between many cultures. Due to the efforts of Bruce and the significant contributions of so many of his aviation cotemporaries, there are few alive these days, who are able remember an empty sky.

Offer Hugs From Home Condolence for the family of BETHANCOURT, BRUCE ALVIN, SR.