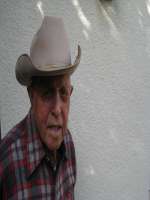 Joseph Mark Bianco, 96, passed away on November 2, 2011 in Phoenix, Arizona. Born to Italian immigrant parents Mark and Domenica Bianco he spent his youth in San Jose, California.
Later, he and his brothers originally farmed properties in Brentwood, California. During WWII, Joe and his brothers were asked to supervise the celery crops of a Japanese American farmer who was to enter an Arizona internment camp. After the war, the farmer was released to return home to California and told Joe of the farming opportunities in Arizona. Joe and his brothers took the advice of the celery farmer, came to Arizona and ultimately purchased 5500 acres near Casa Grande in 1945. The Bianco brothers successfully farmed this land raising diversified crops and breeding pure bred Charolais cattle for nearly 50 years. Joe was also on the Board of Directors for the Midway Flood Control District.
His farming and ranching activities defined what Joe did but did not define who he was. He was first and always a family man, never happier than when he was surrounded by his wife, daughters and their spouses, and grandchildren. A big family gathering over a shared meal was his favorite. Joe is survived by his loving wife, Annette, of 63 years, his daughters Diane Glover (John), Linda Bohon (John), Leslie Phillips (Jay) and his grandchildren Claire Glover Wire, Kelly and Molly Bohon, and Matthew and Tanner Phillips. The family would like to thank the caregivers of Hospice of the Valley and Home Instead for making Joe’s last days more comfortable. A private family service is planned. In lieu of flowers
donations will be accepted in Joe’s memory by Endovascular Research, Barrow Neurological Foundation, 350 W. Thomas Road, Phoenix, AZ 85013 or Hospice of the Valley, 1510 E. Flower Street, Phoenix, AZ 85014.

Offer Hugs From Home Condolence for the family of BIANCO, JOSEPH