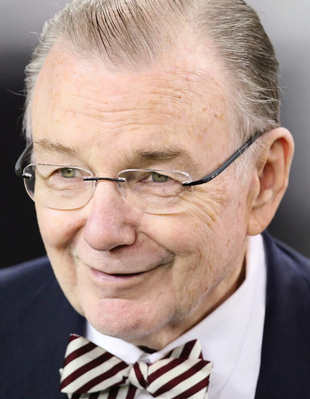 Phoenix – William Vogel (Bill) Bidwill passed away in Phoenix on October 2 at the age of 88.

Born on July 31, 1931 in Chicago, he is the son of Charles and Violet Bidwill. His father purchased the Chicago Cardinals of the NFL in 1932, starting a life-long association with the team for young Bill.

A two-sport athlete at Georgetown Prep outside of Washington, DC, Bidwill received the school’s highest honor, the Insignis Medal, in 1990 and in 2017 was selected to the school’s Athletic Hall of Fame.

After earning his undergraduate degree from Georgetown University in 1954, Bidwill proudly served in the United States Navy before taking on a full-time role with the team in 1960. That same year he married Nancy (nee Lavezzorio). The two were married for 56 years until her passing in 2016 and had five children: daughter Nicole and sons Bill Jr., Michael, Patrick and Timothy.

While well-known for his understated nature and a preference for staying out of the spotlight, “Mr. B” was recognized often for his contributions and accomplishments as Cardinals owner. In 2017, he was enshrined in the Arizona Sports Hall of Fame which honors those who have made significant contributions to the state’s athletics community.

Bidwill has also been lauded for being at the forefront of diversity in hiring practices in the National Football League. This was evidenced by the hiring of the first African American female executive in NFL history (Adele Harris), the league’s first African American contract negotiator (Bob Wallace) as well as its first African American head coach/GM tandem (Dennis Green and Rod Graves). In 2010 he was honored with the Paul “Tank” Younger Award from the Fritz Pollard Alliance, whose purpose is to promote diversity and equality of job opportunity in the NFL.

Also in 2010, Bidwill was inducted into the Sports Faith Hall of Fame in Lake Forest, IL. At its December 2010 commencement exercises, Northern Arizona University awarded Bidwill an honorary doctor of humane letters degree for “his contributions to the university, his community and his profession.”

In addition to his five children, 10 grandchildren and one great-grandchild, Bidwill is survived by his brother Charles (“Stormy”).

A funeral mass will be held at 10:00 AM on Tuesday, October 8 at St. Francis Xavier Catholic Church in Phoenix (4715 N. Central Avenue).

Offer Hugs From Home Condolence for the family of BIDWILL, WILLIAM VOGEL (BILL)