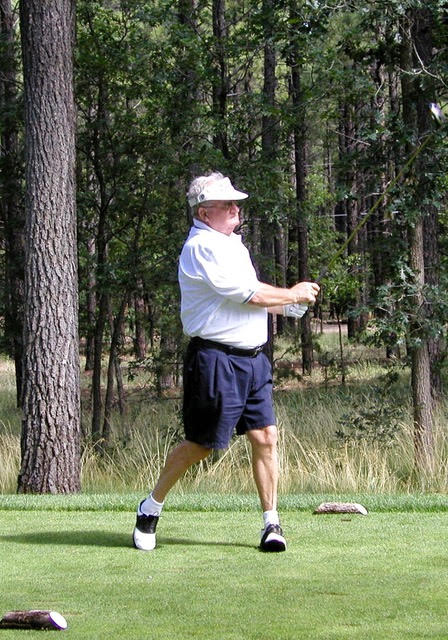 Allen “Al” George Birmingham was born in Coraopolis, PA as one of the 8 children born to George and Helen Birmingham. Al started his lifelong love of golf as a caddy at the age of 9, became a caddy master at 14, and graduated from Moon High School (1951) with varsity letters in basketball and golf. The first of his family to attend college, Al graduated from Wake Forest University on a golf scholarship as a teammate of Arnold Palmer (1955).

After college, Al served in the Chemical Corps of the Army. Following his honorable discharge, Al sold pharmaceuticals and insurance until he became a sales rep for Titleist, a position he proudly held for 34 years. With Titleist, Al was responsible for the southwest territory and was awarded Titleist National Salesperson of the Year multiple times (1977, 1978, and 1989). If you spent time with Al in the last 30 years, you would’ve walked away with Titleist accoutrements — a “doz” golf balls, a visor, bucket cap, FootJoy socks, etc. Even after retirement, Al never stopped representing the brand he loved, mentoring other salespeople, and being sure everyone knew that Titleist was the number one brand in golf.

Al’s “family unit” was his most treasured success. He never tired of sharing in the triumphs of his 5 children, 11 grandchildren, and 2 great-grandsons. His wife, Marion Winne Birmingham, was his steadfast partner for 62 years when she passed in 2018. Their love began at age 14, grew into high school sweethearts, matured into marriage on September 10th, 1955, thrived with multiple state and cross-country moves, flourished during changes in career, and endured through life’s ups and downs. Al passed peacefully, surrounded by family, on February 20th, 2020. Al is survived by his children Scott (Annie), Jan, Susan DeLozier (Henry), Jill Iserman (Lance), Allen, and their families.

Al loved black licorice, red wine, meals and pies made by Marion, time spent on the golf course, fishing, his cabin in the White Mountains, his family — and so much more. The only things he didn’t like were negative talk and swimming in any month that wasn’t August. Al’s last words, when asked how he was feeling, were, “I’m perfect”.

Offer Hugs From Home Condolence for the family of BIRMINGHAM, AL