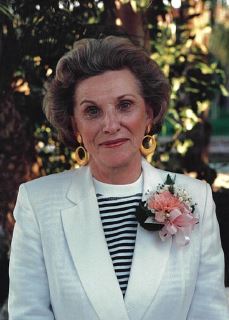 May 31, 1921 to September 16, 2019
Irene Clara Rouhselange entered the kingdom of God at the age of 98. Irene’s powerful faith and generous and courageous spirit touched everyone who knew her.
Irene was born at home in Crown Point, Indiana, the third oldest of nine children. During World War II she married Carl Raymond Bjorklund who was a Navy officer and pilot. After Carl finished medical school, they first settled in Hobart, then Rochester, Minnesota, and finally Phoenix, Arizona, while raising five children.
In the 1970’s, Irene and her late husband Carl established a group home and day program in Chino Valley for the developmentally disabled. While Irene devoted herself primarily to her and children, two of whom have disabilities, she was also a docent at the Heard Museum, and a volunteer for St. Vincent de Paul and her parish. As a young woman, she studied interior design at the Art Institute of Chicago and never lost her love of art, fashion and home décor.
Cherishing Irene’s memory are her five surviving brothers and sisters and their spouses; Marie Kash, Dolly and (Jim) Kennedy, Joan Polzin, Janis and (Jon) Hendrix, and Sook and (Marianne) Rouhselange, and her five children and their spouses; Paul and (Anita) Bjorklund, Christine Bjorklund and (Patrick Mason), John and (Laura) Bjorklund, Mary Kay Bjorklund and Peter Bjorklund, her eight grandchildren and their spouses; Kara and (Jeremy) Beer, Spencer Bjorklund, Britt Bjorklund, Peter Eric and (Tiffany) Bjorklund, Emily and (James Drake), Carly Bjorklund and (Mike Cove), Dan and (Natalie) Mason, Molly Mason and (Matt Farrell), along with eight great-grandchildren will fondly remember “MorMor” as will her large extended family. We miss you; we thank you and we love you.
A Visitation will be held on Thursday, September 19, 2019 from 6:00 – 8:00 PM with Rosary prayer at 7:00 PM at Whitney & Murphy Funeral Home, 4800 E. Indian School Road, Phoenix. Funeral Mass will be held on Friday, September 20, 2019 at 10:00 AM at Most Holy Trinity Catholic Church, 8620 N. 7th Street, Phoenix. Interment will follow at St. Francis Catholic Cemetery.
The family is grateful to all the compassionate caregivers at Constant Care and Hospice of the Valley. In lieu of flowers, please send donations to the Intermountain Centers for Human Development, 994 S. Harrison Rd., Tucson, AZ 85748 or Hospice of the Valley, 1510 E. Flower Street, Phoenix, AZ 85014. Condolences may be expressed at www.whitneymurphyfuneralhome.com

Offer Hugs From Home Condolence for the family of BJORKLUND, IRENE CLARA