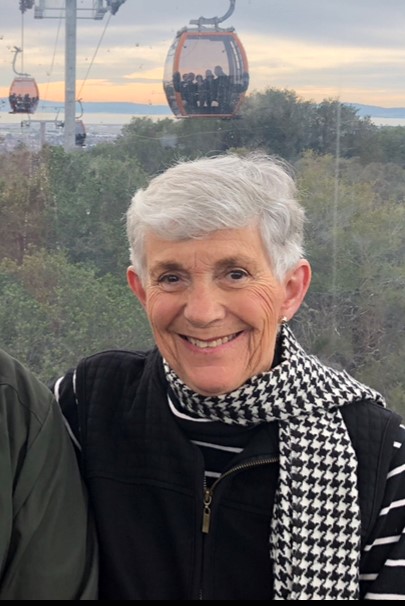 Barbara Joan Blesch was born in Pensacola, Florida on February 3, 1937 to Everett and Minnie Wolf. She peacefully exited this world on April 27, 2020. The daughter of a Naval Aviator, Barbara began her adventurous life in Honolulu. When Everett joined Trans World Airlines as a commercial pilot, the family resettled in the Kansas City area. Barbara Joan graduated from Raytown, Missouri High School in 1955 and afterward attended the University of Missouri where she was a member of Delta Gamma sorority. After college, Barbara continued her life’s adventure as a TWA air hostess in the late 1950s during the golden era of aviation at the height of air travel’s glamor days. It was during her years as a TWA hostess that Barbara met the love of her life Bill Blesch on a Christmas flight to Phoenix. The couple married soon after and relocated to the San Francisco Bay Area. Barbara, Bill, and their two young sons returned to the Kansas City area in the late 1960s, settling in Leavenworth, Kansas. Barbara devoted herself to her young family, raising her two boys. She became active in the community and was a member of the Leavenworth Board of Education. In 1980, the family once again relocated, this time to Panama City, Florida where Barbara became an avid tennis player and was active in the Saint Thomas by the Sea Episcopal Church. Barbara, Bill, Bob and David enjoyed summers in Montana where Barbara developed a passion for fly fishing and the outdoors with the Big Sky Hikers. Barbara relocated to Phoenix in 1999 and divided her time between Phoenix and Big Sky, Montana until her death. Frequently referred to as a “force of nature” even later in life, Barbara is remembered for her direct no-nonsense demeanor and ongoing contributions to her community. Barbara served on her community’s board of directors improving the neighborhood for all. Barbara is preceded in death by her husband William, her son Robert, her younger brother George, and her Welsh Terrier Stormy. She is survived by her son David of San Francisco. There are no plans for a memorial service until a later date due to COVID. In lieu of flowers, her son, David requests donations to the Gallatin River Task Force (gallatinrivertaskforce.org) or the Arizona Desert Botanical Gardens (dbg.org) in memory of Barbara Joan Blesch. Condolences may be expressed at www.whitneymurphyfuneralhome.com

Offer Hugs From Home Condolence for the family of BLESCH, BARBARA JOAN