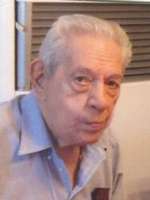 92 of Phoenix, Arizona was lifted up to the Lord at home on January 2, 2013. He is survived by the love of his life Rita of 71 years, his children Michael Jr., Cindy, Celeste, Chris and Rita, son-in-laws, grand, great-grand and great-great grandchildren. Mike was born February 14, 1920 in Chicago, Illinois. He served in the Army during WWII, Americal Division. He moved his family to Phoenix, Arizona in 1963. He worked for Motorola and had enjoyed retirement since 1982. Mike was an avid lover of sports, a member of the Knights of Columbus, and had a unique way of telling jokes with his own personal sense of humor. Visitation will be held from 4-8 pm, with a Rosary at 7 pm Wednesday, January 9th, at Whitney & Murphy Funeral Home, 4800 E. Indian School Road. Funeral Mass will be will be 10:30 am, Thursday, January 10th at St. Mark’s Catholic Church, 400 North 30th Street. Interment will follow at Green Acres Cemetery, 401 North Hayden Road, Scottsdale, AZ 85257.

Offer Hugs From Home Condolence for the family of BOBIS, MICHAEL LOUIS “MIKE”