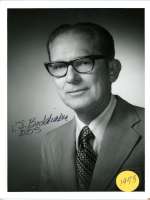 Dr. V. S. Boddicker died Friday, May 18th at age 94. He was born near Newhall, IA, one of eight children. He is survived by one daughter, Janet Rowe (Jack), four grandchildren, three great grandchildren and one sister. He was predeceased by his wife of nearly 68 years, Betty and two children, Connie and Charles. Vernon was president of the Maricopa County Dental Society in 1947 – 48. In 1963 he was president of the Association of American Dentists, an organization successful in stopping the rapid march of the American Dental Association toward socialized (government) dentistry. After retiring he devoted his time to trading stocks and commodities and to supporting organizations that promote free markets and limited government. His only regret was that he would not be able to vote against Obama. A Visitation will be held Wednesday, May 23, 2012 from 5:00 – 8:00 P.M. at Whitney & Murphy Funeral Home, 4800 E. Indian School Rd., Phoenix. A Memorial Service will be held Thursday, May 24, 2012 at 9:00 A.M. at The Terraces, The Gathering Place, 7550 N. 16th St., Phoenix, with a reception to follow. In lieu of flowers, please send contributions to Hospice of Arizona, 19820 N. 7th Ave., Phoenix, AZ 85027.

Offer Hugs From Home Condolence for the family of BODDICKER, VERNON S. D.D.S.