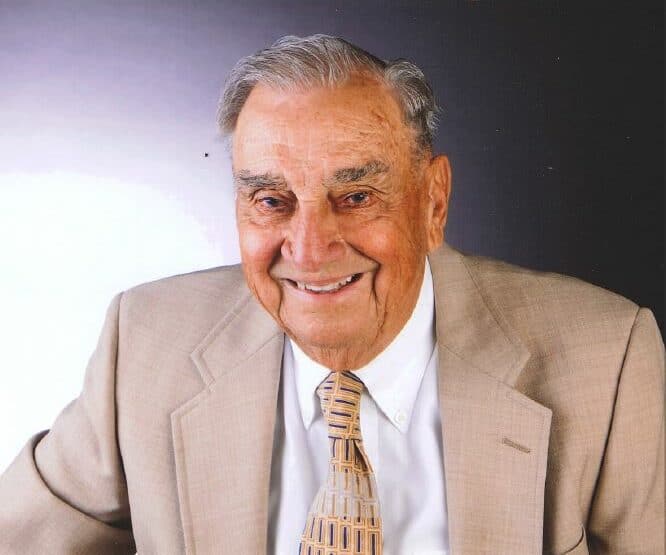 Harold F. Bode was born to Lillian and Fred Bode in Hannibal, Mo. on August 15, 1921. He graduated Hannibal High School and Hannibal LaGrange Jr. College before entering the Navy in 1942. While serving in the Navy he attended seven different colleges and was discharged in December, 1945. One week later he was introduced to his future wife and they were happily married for 73 years. Zaidee was already attending the university and Harold enrolled the second semester. Harold graduated the University of Missouri with a degree in electrical engineering. Upon graduation, he was hired by General Electric Company to work in the Naval Ordnance Department in Pittsfield, Massachusetts. In 1965, he transferred to the Computer Department in Phoenix which eventually became Honeywell. He became the Manager of Quality Control and retired in 1985.
He was preceded in death by his foster brother Loren Surratt and son Rick. He is survived by his wife, Zaidee, 3 children, Lauren Wilson (Jim), Chris, Phil (Michelle), daughter-in-law Maria Cruz, 9 grandchildren, and 4 great grandchildren.
A celebration of life will be held at Brophy Chapel, 4701 N. Central Avenue in Phoenix, at 4:00 P.M. on Wednesday, October 27, 2021. In lieu of flowers, donations may be made to St. Vincent de Paul Society or UMOM New Day Center. Condolences may be expressed at www.whitneymurphyfuneralhome.com.

Offer Hugs From Home Condolence for the family of BODE, HAROLD F.