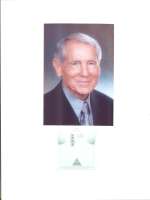 A Phoenix native and fixture of Arizona baseball for 50 years, passed away peacefully at home Tuesday, February 14, 2012 at the age of 83 after a long, courageous battle with Parkinson’s disease.
Born in Phoenix on July 24, 1928 to Dominic and Marciline Boetto, Herb entered into friendships that were maintained for his entire life. He attended North Phoenix High School and then Arizona State University, where his skills on the baseball diamond began to gather notice. He signed a contract with the New York Giants and played in the minor leagues for several years before enlisting in the Air Force, where, while serving in Panama, he met and married the love of his life, Betty. Moving pack to Phoenix after his service, the young family established their home and Herb began his career teaching and coaching baseball, while playing semi pro ball with the Casa Grande Cotton Kings. Later as coach at Cortez High School he led his team to the State Championship in 1963. Moving on to coach and teach at Glendale Community College, he coached his 1968 team to a Junior College National Championship. Herb had the honor of being selected as a coach for the 1972 first US College All Star Team on their tour of Japan. In 1988 Herb was named to the National Junior College Coaches Hall of Fame. Herb will be missed every day by Betty, his beloved wife of 57 years, his daughters Patti (Chris) Pullen, JoDee (Robert) Janson and his grandchildren Michael (Jolinda) Pullen, Shaffer Pullen, Lizzy (David) Rex and Jessica Janson. Herb is also survived by his sisters Beulah Hagel and Pauline (Nathan) Painter and his mother-in-law, Elizabeth Masden. He was preceded in death by his brother Nick. In addition to his family, Herb will be remembered and mourned by the countless young men who had the good fortune to play baseball on a team led by Coach Boetto. A Celebration of Life Service will be held at 11:00 am, Saturday, February 25th at The Church of the Beatitudes, 555 West Glendale Avenue in Phoenix. In Lieu of Flowers the family requests that donations in Herb’s name be made to Sun Valley Hospice Foundation, 7227 East Baseline Road #127, Mesa, Arizona 85209.

Offer Hugs From Home Condolence for the family of BOETTO, HERBERT