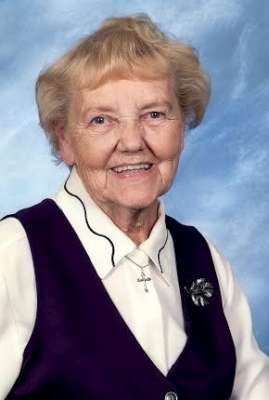 Artis Laura Bangert Bohr, born July 9th, 1924, was welcomed home by our Heavenly Father on July 27, 2014.  She passed away peacefully at the home of her son Jonathan, surrounded by her loving family. Artis was the sixth of eight children born to Marie and Otto Bangert of Guide Rock, Nebraska and was baptized and confirmed at Zion Lutheran Church in Lawrence, Nebraska.

In her early twenties Artis moved to St. Louis, Missouri where she was employed by the Lutheran Hour and it was during this time that she met and married her husband of 40 years, Michael Bohr II.  They were married at the Trinity Lutheran Church on October 4, 1947 and over the course of the next ten years added five sons to their loving family.

In 1955, Michael and Artis moved with their family to Phoenix, Arizona and became members of Christ Church Lutheran where she faithfully worshiped the Lord, shared friendship and served for the next fifty nine years.

Artis worked at Camelback High School in the cafeteria while her boys were still in school and after they all graduated she worked as a Nursing Assistant at Arizona Eastern Star Nursing Home.  At the age of 79, and after 27 years with Arizona Eastern Star, she retired claiming that most of the people she was caring for were younger that she was.  She loved her work and the many friends she made while caring for the elderly.

Artis was a kind and loving woman and will be remembered by the great love of her family and her deep love of Christ our Lord.

Offer Hugs From Home Condolence for the family of BOHR, ARTIS LAURA BANGERT